Is technology the path to a lower carbon future?

Advances in technology will keep energy supplies plentiful and affordable – enough to meet projected demand many times over — and help pave the way to a lower carbon energy mix, according to data published today in the BP Technology Outlook.

“Technology opens up a whole range of possibilities across the energy sector,” said Bob Dudley, BP Group Chief Executive. “It can bring great value to consumers and businesses, and it can also disrupt and challenge existing models. Today, for the first time, we are sharing our analysis of energy technologies and the options they present society in the quest for an abundant, sustainable and lower carbon energy future.”

Digital technologies – such as data analytics and automation enabled by supercomputing – have the greatest potential to drive far-reaching change.

The 80-page Technology Outlook brings together previously internal BP analysis and the work of other noted business and academic experts, setting out technology and policy choices governments and industry can make around energy resources, oil and gas supply, power generation, transport, and options for reducing carbon emissions.

In the power sector, which currently accounts for 38% of world primary energy demand, gas and coal-fired power are generally the most competitive today. BP’s analysis predicts wind and solar will continue reducing costs at around 14% and 24% respectively per doubling in installed capacity, consistent with past performance, and hence become more competitive over time. 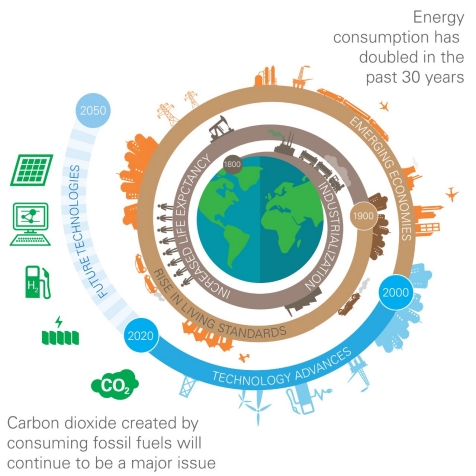 In North America, and ignoring taxes and subsidies, modern combined-cycle gas turbine power plants would have a cost advantage over coal today if policy makers were to adopt a modest price on carbon dioxide of less than $40 per tonne. By 2050 a carbon dioxide price of $80 per tonne would make onshore wind technology competitive with gas-fired power, with utility scale solar photovoltaic close to being competitive, even accounting for the cost of managing intermittency. This price on carbon would also make carbon capture and sequestration with gas-fired power economic.

The publication suggests that liquid fuels will continue to dominate global transportation through to 2035 and beyond, largely due to their high energy density. The average efficiency of new light-duty vehicles is expected to improve by 2-3% per year as a result of increased hybridization and improved powertrains, combined with advanced fuels and lubricants.

By 2050, electric vehicles could be approaching cost-parity with the internal combustion engine, due to advances in battery technology, while fuel cell vehicles could still have further to go.

The report also highlights the growing influence that digital technologies are having on the energy industry.

“Digital technologies – such as advanced sensors, data analytics, robotics and automation, enabled by supercomputing – have the most widespread potential to drive change and make energy supply and consumption safer, more reliable, more efficient and more cost-effective” said David Eyton, BP Group Head of Technology. “These technologies are already transforming the oil and gas industry, and the longer term possibilities are frankly difficult to imagine.”

“We are also staying close to developments in biosciences and advanced materials, which could lead to extraordinary improvements in the performance of fossil and non-fossil energy systems, including batteries, solar conversion and hydrogen as a fuel” Eyton added.

The BP Technology Outlook is available online at www.bp.com/technology.

We Can’t Get There from Here: Why Pricing Congestion is Critical to Beating It