WASHINGTON, November 8, 2015 – Climate change is already preventing people from escaping poverty, and without rapid, inclusive and climate-smart development, together with emissions-reductions efforts that protect the poor, there could be more than 100 million additional people in poverty by 2030, according to a new World Bank Group report released before the international climate conference in Paris.

The report, Shock Waves: Managing the Impacts of Climate Change on Poverty, finds that poor people are already at high risk from climate-related shocks, including crop failures from reduced rainfall, spikes in food prices after extreme weather events, and increased incidence of diseases after heat waves and floods. It says such shocks could wipe out hard-won gains, leading to irreversible losses, driving people back into poverty, particularly in Africa and South Asia.

Natural hazards, to which poor people are often more exposed and almost always more vulnerable, will become more intense and frequent in many regions

“This report sends a clear message that ending poverty will not be possible unless we take strong action to reduce the threat of climate change on poor people and dramatically reduce harmful emissions,” said World Bank Group President Jim Yong Kim. “Climate change hits the poorest the hardest, and our challenge now is to protect tens of millions of people from falling into extreme poverty because of a changing climate.”

The report finds that the poorest people are more exposed than the average population to climate-related shocks such as floods, droughts, and heat waves, and they lose much more of their wealth when they are hit.

Climate change is a threat to poverty reduction which will increase as climate shocks worsen. 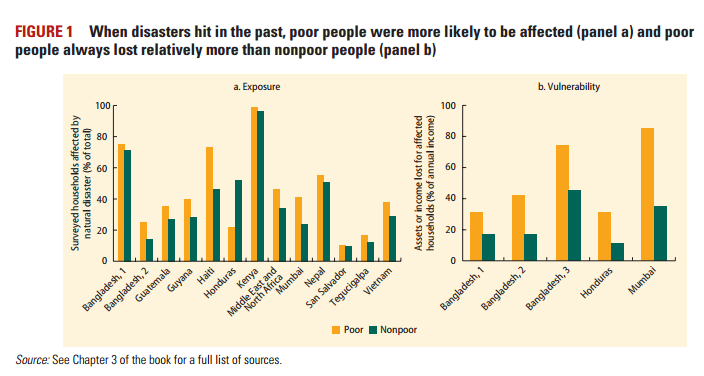 The report combines the findings from household surveys in 92 countries that describe demographic structures and income sources with the most recent modeling results on the impacts of climate change on agriculture productivity and food prices, natural hazards such as heat waves, flood and drought, and climate-sensitive diseases.

Without rapid, inclusive and climate-informed development, more than 100 million people could be pushed over the poverty line by 2030. Sub-Saharan Africa and South Asia will be the hardest hit.

The report, released a month before negotiators gather in Paris for international climate talks, shows how ending poverty and fighting climate change can be more effectively achieved if addressed together.

‘Dragon water’ could power the planet

Does CCS Hold the Key to Bridging Climate Gap?