October 20, 2015 – Advanced and emerging economies have made progress in addressing climate change, yet most are on a trajectory that would see them fall short of their mitigation goals.

Governments need to significantly accelerate their efforts and strengthen their climate change policies, according to a new OECD analysis of climate change mitigation in 44 countries and the EU.

The report finds that a growing number of these countries have established carbon-pricing instruments, cut fossil fuel subsidies, invested in R&D for green technologies, protected forests and reduced emissions from factories, farms and landfill sites. Nearly all have decreased GHG emissions per unit of GDP.

Yet policies to combat climate change are still not working fast enough, underscoring the need to move from pledges to action.

“The momentum behind climate action is growing, with more countries taking action to price carbon and regulate emissions. But achieving the targets countries have set for themselves will require a sharp acceleration of effort,” said OECD Environment Director Simon Upton.

“Countries are running out of time to make the policy adjustments needed to meet their targets and keep alive the long-term goal of limiting the temperature rise to 2 degrees. Governments need to construct a policy pathway that will lead to zero net carbon emissions by the end of the century.” 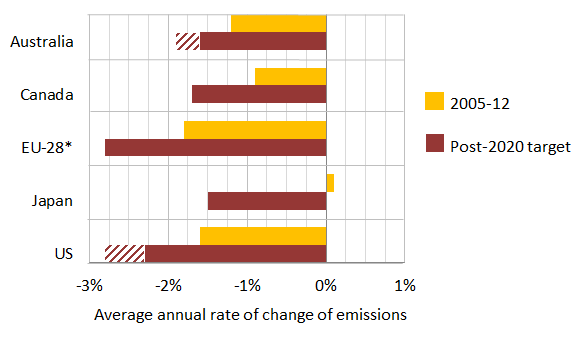 * Includes land use, changes in land use and forestry, except for the EU 28.
** Shaded areas show the range of reduction rates needed to meet targets that are expressed as ranges.

China and India have based their goals for 2020 and 2030 on the ratio of emissions to GDP, rather than on absolute levels. Their current rates of decoupling emissions from growth put them on track to meet their 2020 goals, although China’s 2030 target would require an accelerated rate of decoupling.

Aggregate GHG emissions from OECD countries peaked in 2007 but remained above 1990 levels in 2012. Efforts to cut emissions through improved energy efficiency and the use of renewables have been partially offset as economic growth has recovered and global demand for transport has risen.

Several countries are also reducing their use of nuclear energy after the Fukushima disaster and some are turning to coal without carbon capture and storage. These countries still have a long way to go to transform fossil fuel-intensive systems that have been historically responsible for most of their emissions.

For the emerging economies studied, aggregate emissions have significantly increased since the 1990s. These countries face different policy priorities and challenges and should avoid locking in high-carbon pathways when setting policy and building new infrastructure.

In-depth country profiles and a country-by-country data visualisation to accompany this report will be available from mid-November. Other findings in the overview report include:

If one country takes the lead, will the rest follow?