The report follows from a 34 city national engagement tour that the NEB Chair and CEO Peter Watson started in January 2015 in Atlantic Canada. The tour concluded on June 3 in Calgary with the NEB Pipeline Safety Forum.

The report summarizes what the NEB heard during the engagement tour.

It outlines common themes that were brought forward in every region of Canada and describes how the NEB will address the feedback. 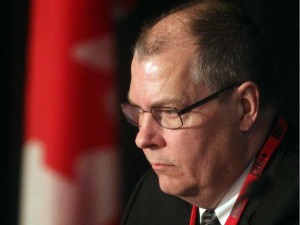 “The NEB is not done with engaging Canadians: on the contrary, the Engagement Initiative was meant to be the beginning of a new and different kind of conversation with our stakeholders,” said Watson.

Through 2015, the NEB achieved several milestones that are in direct response to what Mr. Watson and NEB staff heard during the tour.

They include: a full public consultation on company emergency response plans; the launch of a pipeline incident map; posting NEB inspection reports online; and opening two regional NEB offices in Montréal and Vancouver.

The Report concludes that the National Engagement Initiative fundamentally altered the way that the NEB understands its role as a federal regulator.

It notes that for most of the 50-plus years the NEB has focused on the independent, quasi-judicial function of making regulatory decisions. Its engagement efforts were directed at the stakeholders who were directly impacted by, or who could provide expert testimony on, energy infrastructure development.

It notes that for a variety of reasons, people are more actively concerned about how energy infrastructure is developed, how it is maintained, and who is accountable if something goes wrong. They are more alert to environmental risks, and regional needs.

Notes the report, they have a lot of questions about “how…”, “if…”, and “when…”,  the answers to which are not simple, and invariably lead to more questions.

“We realized that we need to be far more attentive to those questions and concerns during the lifecycle of energy infrastructure, and we need to ensure that industry is, as well. We realized that some of our processes and expectations (the transparency of emergency response plans, for example) should be modernized and improved to respond to the evolved operating context in Canada.”

The Engagement Initiative has given us the necessary foundation to chart a course for our future that is responsive to the needs of Canadians. We have heard first-hand what is needed from us. We have listened to ideas and issues. We have promised to do better, starting immediately.

The NEB mandate has not changed, notes the Report, namely to function as an independent decision-maker to keep energy infrastructure in Canada safe, secure and functioning well.

“What has changed is the way we will work with Canadians in fulfilling our mandate, role and function. We do not expect that the journey ahead will be smooth, easy or without challenges, but we do feel we are on the right track toward building the kind of responsive regulatory organization that Canadians want. Ultimately, our success will be determined by the trust that Canadians have in us as we go forward.”

The full Report is available here.