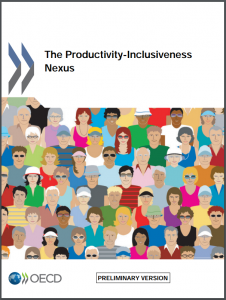 May 31,2016 – Declining productivity growth and rising inequality are two of the biggest obstacles to improved economic performance, according to a new OECD report.

The Productivity-Inclusiveness Nexus explores the root causes behind each of these challenges, examining the extent to which they are connected, and at how to take a coherent policy response.  In particular, it signals the need to expand the productive assets in an economy by investing in the skills of people and in an environment where all firms and regions have a chance to succeed.

The report discusses possible complementary explanations for the slowdown in productivity growth, which has affected some 90% of OECD countries since the turn of the millennium and has now spread to emerging market economies. It says the failure to translate rapid technological change into productivity growth reflects a mix of cyclical and structural factors.

One cyclical factor has been the persistently low investment in physical capital, in a context of weak global demand. On the structural side, there has been growing dispersion in productivity performance between leading, or ‘frontier’ firms, and other companies that are lagging behind.

The report finds several, possibly complementary, explanations for the dispersion in productivity growth, such as the breakdown of technology diffusion and the possibility of growing capture of rents by the frontier firms.  A related issue is the a lack of competition in certain markets, which may have on the one hand, allowed poorly-performing firms to linger, trapping valuable human and capital resources in unproductive activities, entrenching inequalities of  income, while on the other increasing leading firms market power and raising barriers to entry.

Indeed, the Nexus report also shows that inequalities of income, wealth, well-being and opportunities have increased in a majority of countries. It highlights how different aspects of inequality tend to feed off of each other, hindering efforts to improve individual well-being and undercutting our economies’ productive potential. It notes in particular how low income groups and regions that have fallen behind tend to accumulate economic and social disadvantages.

Higher inequality results in fewer people in the bottom 40% of the population investing in skills, thereby worsening inequality and reducing productivity growth. The report says increasing productivity dispersion across firms appears to have contributed to a widening of the wage distribution over the past two or three decades.

The report highlights how the growth of the digital economy raises new challenges for jobs and skills. It adds that the growing weight of finance in the global economy may have diverted investment away from productive activities, while resulting in a higher concentration of wealth at the top of the income distribution.

“Tackling the ‘nexus’ of productivity and inequality challenges will require a new, coherent and multidimensional policy approach in order to ensure that all individuals, firms and regions can realize their productive potential and share in the benefits of improved productivity growth.” said Gabriela Ramos, Special Counsellor to the OECD Secretary-General, Chief of Staff and Sherpa to the G20, who is heading the work behind the report in the context of the All on Board for Inclusive Growth Initiative.

“In practice, this will call for measures that aim to help people, businesses and regions lagging behind,” she added.

Better matching of skills to the needs of the labour market and the provision of lifelong learning and training opportunities are part of the solution. But so too is encouraging entrepreneurship, the diffusion of innovation and enabling small companies to access the skills and resources they need.

Policies that facilitate both business entry and exit can also help reduce skill mismatch. High rates of skill mismatch often occur when an economy has a high proportion of long-established, unproductive firms that tend to use high-skilled labour less effectively.

The report also says regions and cities have a key role to play by adapting policies to the specific needs of the local communities. For instance, housing and transport policies can play a key role in helping disadvantaged groups access training opportunities and jobs.

In the context  of the OECD’s New Approaches to Economic Challenges (NAEC) initiative, the Nexus report also highlights the need to break up traditional policy ‘silos’ and pursue cross-cutting institutional reform to encourage a coherent and complementary approach to policy making.