VANCOUVER — The Pembina Institute’s new interactive B.C. Clean Energy Jobs Map quantifies the number of jobs in the clean energy sector and pinpoints where renewable energy projects are located in the province.

British Columbia has one of the most robust clean energy sectors in Canada, employing people in the province’s largest cities to its most remote communities, including many First Nations. In fact, on a per capita basis the highest concentration of jobs in renewable energy in B.C. are found in the Northeast — a region that typically struggles with a lack of diverse employment opportunities and boom-and-bust economic cycles. 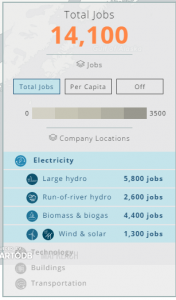 In total, 156 renewable energy projects exist in B.C., 15 per cent of which are currently under construction. Projects include wind and solar power, run-of-river hydro, large hydro, biomass and biogas.

Despite the numerous benefits offered by the clean energy economy, including its significant export potential and multi-sectorial support — including industry, First Nations, labour and environmental groups — this sector is often overlooked as an economic driver relative to fossil fuel industries in the province.

And renewable energy is only part of the bigger clean energy economy picture. The clean energy economy is the collection of all economic sectors that are directly responsible for supplying technologies, products and services that have measurable environmental benefits in terms of their abilities to reduce carbon pollution and improve energy efficiency.

At a time when the world is looking for ways to swiftly reduce carbon pollution, the market for clean energy technology and energy efficiency products and services is rapidly expanding.

With the right policy drivers, B.C. could develop a world-class clean energy economy that would help the province meet its carbon-pollution reduction targets and diversify its exports toward technologies and services that are in increasingly high demand. The map offers the first look at where clean energy jobs are located in B.C. 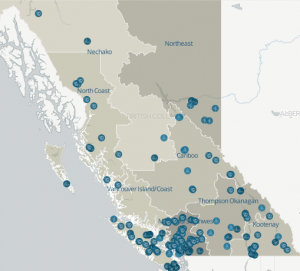 “Clean energy is a real success story, employing thousands of British Columbians in communities across the province. Smart, targeted policies will help generate even more of these family-supporting, career-track jobs across British Columbia.” said Aaron Ekman, Secretary-Treasurer B.C. Federation of Labour. “The future economic health of our province depends on a strategy that will put more dots on this map,” he added.

“The Clean Energy Jobs map that the Pembina Institute put together is a clear illustration of the jobs that are created by clean energy projects. In First Nations communities, these long-term and meaningful jobs are needed,” said Dr. Judith Sayers, Strategic Adviser, Hupacasath First Nation.

“Clean Energy projects, especially those that have First Nations as partners, provide revenue to the B.C. economy in many regions of the province. The B.C. government must pursue greater opportunities for First Nations in clean energy as these projects provide many jobs and other benefits to them. They are also fully supported by First Nations due to their low environmental impact.”