Promise of a Thriving Economy for B.C. with Strong Climate Action

British Columbians would have 270,000 more job prospects in 2025 than today, and easily triple that by 2050, with stronger energy and climate policies in effect. These jobs would be spread across sectors and across the province, meaning communities throughout British Columbia will see new economic opportunities.

Provincial GDP would grow at roughly two per cent a year — the same rate projected with or without climate policy — adding a healthy $46 billion over the next 10 years, and nearly doubling by 2050. 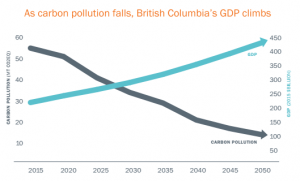 Households stand to benefit too. New climate policies would help British Columbians save money by using less energy. An average rural household would save $1,200 a year and urban households would save roughly $900 per year simply by replacing worn out furnaces and old vehicles over the next 15 years.

The report outlines a mix of policy tools that would position B.C. to maintain its competitive advantage as a climate leader as the rest of North America follows our lead. It is based on new modelling by Navius Research, commissioned by Clean Energy Canada to quantify the economic, job and affordability implications of meeting B.C.’s 2050 climate target. 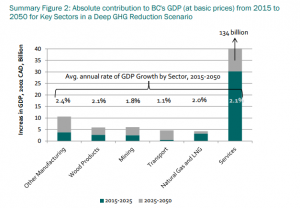 Over the next two to three years, BC needs to:

 Set a schedule for increasing the carbon tax to at least 80$/tonne.
 Continue improving building energy codes.
 Ensure that new drives providing gas compression for natural gas extraction, processing and transmissions emit no GHG emissions (i.e. are powered by electricity).
 Require the natural gas sector to cut its fugitive emissions intensity (i.e. the amount of leaked and vented GHG emissions per unit of gas produced) by 50% from today by 2020.
 Strengthen the regulation on the LNG industry to ensure that these facilities will at minimum use electricity from the BC grid for their ancillary power while supporting electrically powered liquefaction as much as possible.
 Prepare to regulate the emissions of all other industrial sectors in order to cut total emissions from these sectors by at least 50% by 2050. This regulation must include any new sectors that may arise between now and 2050, such as biofuel manufacturing.

 Have a working zero-emission vehicle mandate that set a minimum threshold for zero and near-zero-emissions vehicles. Similar the Californian mandate, the mandate should be 5% of sales in 2020 and it should rise to 15% by 2025.
 Build select public building that are net-zero energy ready (i.e. use so little energy that they could offset annual energy consumption with onsite renewable generation) to provide leadership for upcoming requirements for all buildings.
 Require that all CO2 that is removed from natural gas as it is process is captured and stored rather than vented to the atmosphere. CO2 that would be removed and vented at LNG facilities must instead be captured and stored upstream.
 Set an end-of life date for gas powered drives in the upstream natural gas sector such that they will all be retired by 2050.
 Implement a policy requiring nearly complete (90%) landfill gas capture and destruction or utilization from large landfills.
 Reduce the required GHG intensity of transportation fuels to -15% relative to 2010 under the existing clean fuel standard (i.e. the Renewable and Low Carbon Fuel Regulation Requirement).

In 2025 and thereafter, the government should

 Continue reducing the required GHG intensity of transportation fuels to -20% in 2030 with an end-point of close to -100% by 2050.
 Ensure the real value of the carbon tax is not eroded by inflation by adjusting based on the rate of inflation.
 Continue raising the zero-emission vehicle mandate to 23% of new sales in 2030 and 33% of new sales by 2035.
 Set a building code that requires new homes and most new buildings to be net-zero energy ready.
 Implement a zero-emissions standard for buildings that requires new and replacement space and water heating equipment in buildings to produce zero direct GHG emissions. The government should support retrofits to building envelopes or other systems as necessary to accommodate the zero-emission building standard.
 Ban the development of any new fossil fuel-fired electricity generation unless it can capture and store the carbon that would otherwise be release to the atmosphere.
 Ban organic matter from all landfills in BC. In addition to the province-wide GHG emissions targets, the government should achieve the following energy and emissions goals for key sectors:

A Clean Economy and Jobs Plan for British Columbia: Building a Diverse and Prosperous Economy Through Climate Leadership