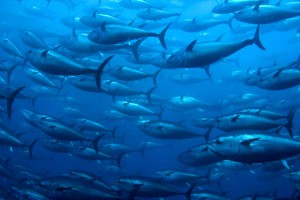 WASHINGTON, February 14, 2017 – Fishing less, and better, could generate an additional $83 billion each year for the fisheries sector, creating a much-needed revenue stream in developing countries and improving global food security, according to a new World Bank Group report.

The Sunken Billions Revisited, an update on a 2009 study, shows that reducing the global fishing effort would allow fish stocks to recover from overexploitation and lead to increases in the weight, value and price of fish landed, boosting the profitability of the fisheries sector from an estimated $3 billion a year to $86 billion.

It would also lead to more fish being caught and landed, because stocks would have recovered to healthier levels, thus helping meet growing global demand for seafood and improving food security in many countries around the world.

“This study confirms what we have seen in different country contexts: Giving the oceans a break pays off,” said Laura Tuck, World Bank Vice President for Sustainable Development. “Moving toward more sustainable fisheries management, through approaches that are tailored to local conditions, can yield significant benefits for food security, poverty reduction and long-term growth.”

The bio-economic model used in The Sunken Billions Revisited – developed by Ragnar Arnason, professor in the Faculty of Economics at the University of Iceland – treats the world’s marine fisheries as one large fishery.

It examines the mismatch between the increasingly high level of effort put into fishing and stagnant or even declining fish catches, and calculates the incremental benefits that could be derived from global fisheries reform.

The analysis reveals foregone economic benefits of about $83 billion in 2012, compared with what could be generated under the optimal scenario.

This result is not statistically different from the sunken billions estimated for 2004, which were revised from an estimated $50 billion in the 2009 study to $88 billion in The Sunken Billions Revisited, based on improvements in the model, better data, and adjustment to 2012 dollars. Both figures emphasize the urgent need for reform and the important economic gains that could be made through a more sustainable management of the world’s fisheries.

While the report makes a strong case for investing in the recovery of fish stocks, it does not prescribe a particular reform path.

Reform experiences in countries and regions as diverse as Peru, Morocco, the Pacific Islands and West Africa show it is possible to reduce overfishing through locally appropriate reforms that ultimately improve the livelihoods and job security of coastal populations.

Reducing the global fishing effort would allow biological processes to reverse the long-term decline in fish stocks seen in many parts of the world.

About 90 percent of marine fisheries monitored by the Food and Agriculture Organization (FAO) are fully fished or overfished, up from about 75 percent in 2005. Fish stocks are also under pressure from pollution, coastal development, and the impacts of climate change.