In order to prevent catastrophic global warming, the International Energy Agency(IEA) estimates that at least $53 trillion must be invested over the next 20 years in renewable energy and energy-efficiency projects and that meeting this goal will require an additional $1 trillion a year in additional investment.
This daunting funding shortfall can be overcome, but for this to happen the private sector needs to step up and take a leadership role.

This is where green bonds come in. Green bonds are a new type of financing that make it easier for organizations to fund projects that deliver positive environmental and climate benefits.

Green bond proceeds exclusively fund green initiatives and, unlike traditional bonds where investors do not have visibility into how the funds will be used, require transparency so investors can see that the funds are being used to benefit or protect our planet. 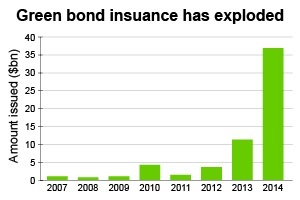 The first green bonds were issued in 2007, but have largely remained a niche offering from a handful of development banks. Over the past two years however, the global green bonds market has started to gain momentum.

In Canada, the green bonds market is in its infancy. Green-energy think tank Sustainable Prosperity reported that labelled green bonds went from zero to $1.2 billion in 2014 in Canada. 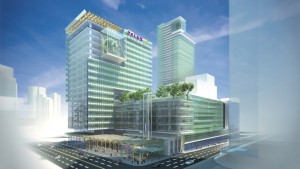 This is the first time in North America that green mortgage bonds have been used to support real estate financing and it demonstrates the potential of green bonds for sustainable building projects. Environmentally conscious investors can support the development of more LEED Gold and Platinum buildings, which will play a massive role in reducing our absolute energy consumption and greenhouse gas emissions.

Here and around the world, the demand for green bonds is rapidly growing as institutional investors increasingly seek out investments that fit within a Socially Responsible Investing (SRI) mandate. Moody’s Investor Services recently reported that SRI investing now accounts for as much as 35 per cent of professionally managed assets worldwide. While there is a much larger climate-themed bond market, labelled green bonds give socially conscious investors an effortless way to integrate environmental initiatives in to their portfolios.

The green bonds market is growing, but it’s still got a long way to go to generate the levels of investment required to tackle climate change. While the growth of green bonds has been impressive, they still represent a small fraction of the $91 trillion worldwide bond market.

Sustainability and renewable energy projects are critical to our future and more funding for environmental initiatives is desperately needed. By working together, socially responsible organizations and socially conscious investors can lead the way in creating a healthier and more sustainable future, for everyone.