BREAKING NEWS
BuildBackBetter with Sustainable Procurement in 2020
COVID-19 — The Good, the Bad and the Ugly
Will the price drop in the Oil Industry allow Geothermal to flourish
Global Economy Faces a Tightrope Walk to Recovery, Says OECD
Covid-19 recovery and fossil fuels – A time for change
Covid-19 is hurting but not halting growth in renewable power
The Changing Face of the Environment Industry
What Can Smart Cities Do to Improve Waste Management?
Why Is Sustainability Crucial for Facilities Management?
Tropical forests may be heating Earth by 2035 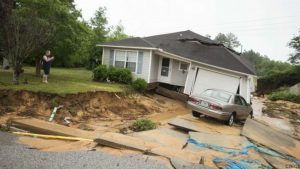 LONDON, 24 May, 2016 – Lloyd’s, one of the world’s biggest insurance companies, says the US government must stop providing insurance subsidies to homeowners building on flood plains and in coastal areas exposed to mounting risks related to climate change.

According to a report in London’s Financial Times, Lloyd’s says the US government’s National Flood Insurance Program (NFIP), which subsidises insurance cover for householders in regions vulnerable to floods and storms, encourages irresponsible house building.

Lloyd’s also says the NFIP subsidy regime is financially unsustainable. Because of claims related to disasters such as Hurricane Katrina in 2005 and superstorm Sandy in 2012, the NFIP has now run up debts of more than $24 billion.

Insurance companies have been among those at the forefront of analysing the financial implications of climate change and assessing climate-related risk worldwide.

In the run-up to the UN conference on climate change in Paris last December, insurance companies pressed for more concerted action on global warming, saying it posed a serious threat to the future of the industry.

Insurers say rising payouts related to climate change and weather in heavily-insured western countries such as the US result in less money being made  available to provide affordable insurance in developing countries, where it is most needed.

A report by Munich Re, one of the insurance industry’s leaders in analysing climate change, says the world’s most deadly and costly catastrophe in 2015 was the Nepal earthquake in April, resulting in at least 9,000 dead and billions of dollars worth of damage.

“As is so often the case in developing countries, only a fraction of the $4.8 billion in overall losses caused by the quake and the aftershocks was insured – $210 million,” says Munich Re.

The situation in the US is the reverse, with heavy NFIP subsidies and other local, state-controlled schemes for too many homes built in areas exposed to storms and flooding.

The most glaring example is along the coast of Florida, a region that is regularly hit by hurricanes and giant storms. Coastal lands are also threatened by sea level rise related to climate change. Yet despite these risks, the area has seen a steep rise in population and housebuilding.

In 1992, Hurricane Andrew hit the Florida coast, causing an estimated 65 deaths and causing $25 billion of damage to housing and businesses.

With encouragement from insurance schemes subsidised at federal and state levels, the damaged areas have all been redeveloped. And insurance experts say that if a similar storm were to hit the Florida coast now, more lives could be at risk and losses would amount to $50 billion.

Professor Omri Ben-Shahar, an expert on insurance law at the University of Chicago, argues in an article in Forbes magazine that government subsidies mean that flood policies are being sold at bargain prices.

He says the system is hard to justify, with middle-class taxpayers living inland having to subsidise mostly upper-income owners of coastal homes.

“Government-provided insurance made sure that premiums were low enough to sustain ongoing development and a massive relocation of population to regions which, we now know, are borderline inhabitable,” says Ben-Shahar.

After the government had to pay out massive amounts in claims in 2012 in the aftermath of super-storm Sandy, the US Congress decided to phase out the NFIP scheme and its insurance subsidies. As a result, insurance premiums in some coastal areas rose tenfold.

An intense lobbying campaign followed, and much of the NFIP scheme is now back in place. – Climate News Network

Warming warning is a burning issue

BuildBackBetter with Sustainable Procurement in 2020

Municipal spending has a critical role to play in helping to address community economic challenges.

From decreasing emissions to unexpected human impacts, the pandemic shows the good, the bad and the ugly sides of a global pandemic.

Does the Bank of Canada have the right tools needed to prevent widespread bankruptcies, wild price swings, and to save the Canadian dollar?