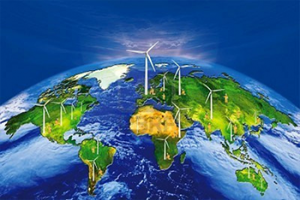 LONDON, 7 February, 2016 – Two sets of scientists in the US have devised new ways to snatch more power from thin air.

One group of Californian chemists reports that it has found a way to filter carbon dioxide directly from the air and turn it into clean-burning methanol.

While scientists at Sandia National Laboratories have announced a design for an offshore wind turbine rotor blade 200 metres long − so huge that it could potentially deliver 50 megawatts from each turbine mast.

Neither innovation is anywhere near commercial exploitation yet. But both are continuing evidence of the ingenuity displayed and possibilities explored in the world’s laboratories and universities in the search for alternatives to the fossil fuel combustion that drives global warming, and with it the potential for catastrophic climate change.

The Sandia scientists, with partners in industry and universities, have taken a new look at the engineering of the giant blades that turn against the skyline in the world’s wind farms.

Most of those in the US are 50 metres long and deliver 1 or 2 megawatts (MW). The turbines and blades face into the wind, and the blades have to be rigid because, if they buckled or bent as the winds rose, they might smash against their towers.

Because the blades must be stiff, their mass multiplies with length, so there is a practical limit to the optimal length and power capacity: 80 metres in length, and 8MW in output.

But the Sandia researchers have considered how palm-trees behave in storms, and thought of another angle: turn the blades downwind of the tower.

It means that the segmented, ultralight, morphing rotors could be made much longer, to take advantage of more wind surface, and generate more power − something the length of two football fields turning in the offshore wind to generate 50MW.

“The US has great offshore wind energy potential, but offshore installations are expensive, so larger turbines are needed to capture that energy at affordable cost,” says mechanical engineer Todd Griffith, who led the design team.

And scientists at the University of Southern California’s Dornsife College of Letters, Arts and Sciences report in the Journal of the American Chemical Society that they have tested a catalyst and a process that directly converts carbon dioxide from the air into the combustible fuel, methanol.

Climate scientists may complain of rising levels of atmospheric carbon dioxide, but as a proportion of the atmosphere even too much is a very tiny quantity. Right now, the gas is mixed with oxygen and nitrogen at 400 parts per million.

But the researchers bubbled air through an aqueous solution of pentaethylinehexamine and a catalyst. They then heated the solution and converted 79% of the captured carbon dioxide into methanol, which could then be distilled.

The temperatures involved are relatively low, at 125°C to 165°C, and they ran the reaction five times with, they say, minimal loss to the catalyst.

It may be a decade before the process could be scaled up to industrial exploitation, and the team leader, GK Suraya Prakash, says: “Of course, it won’t compete with oil today, at around $30 a barrel.

“But right now, we burn fossilised sunshine. We will run out of oil and gas, but the sun will be there for another five billion years. So we need to be better at taking advantage of it as a resource.” – Climate News Network

Tipping the Balance Toward Renewables