Washington, D.C. – At nearly $1.3 trillion in estimated global revenue for 2014, the market for advanced energy products and services is as large as apparel and fashion and almost four times the size of the semiconductor industry worldwide, according to a report commissioned by Advanced Energy Economy (AEE), a national business association.

In the United States, advanced energy market revenue grew 14% last year – five times the rate of the U.S. economy overall – to just under $200 billion, making it bigger than the airline industry, equal to pharmaceuticals, and nearly equal to consumer electronics in this country.

The study, conducted by Navigant Research, found that advanced energy in the United States was an estimated $199.5 billion market in 2014, up 14% from 2013 ($169 billion), and five times the rate of growth of the U.S. economy overall. Areas of growth included solar energy (up 39%) and natural gas generating equipment (48%), in long-anticipated response to lower-priced natural gas supplies.

Wind power, which suffered a severe setback in 2013 due to the on-again, off-again federal production tax credit (PTC), rebounded in 2014 with four-fold growth, to $8.2 billion, and a pipeline of projects that could result in revenue rivaling the $25 billion realized in 2012, its biggest year to date.

“This report shows that advanced energy is a vibrant industry that is driving economic growth,” said Graham Richard, CEO of AEE. “Across the country and around the world, advanced energy companies are delivering technologies and services that make the energy we use secure, clean, and affordable. AEE is committed to bringing together business leaders and policy makers to accelerate the progress of this industry.” 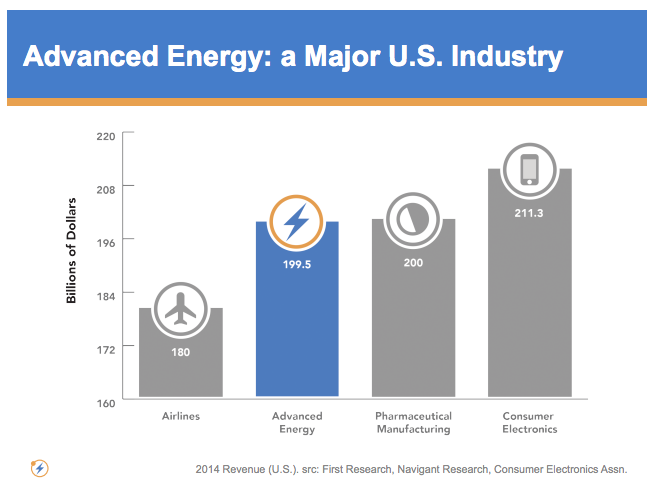 Advanced Energy Now 2015 Market Report is the third annual report of market size, by revenue, of the advanced energy industry, worldwide and in the United States, produced by Navigant Research for AEE. This year’s report contains four years of revenue data, starting with 2011. Among the findings:

In addition to the most comprehensive market data ever compiled, Advanced Energy Now 2015 Market Report contains 17 feature articles on significant trends and developments, ranging from “smart parking” systems and biofuels for specialized markets and emerging economies to industrial energy management and energy storage. The full Advanced Energy Now 2015 Market Report is available for download at http://info.aee.net/aen-2015-market-report.

“The growth in the advanced energy market in 2014 shows how important these technologies are today,” said Deb Frodl, Global Executive Director, GE Ecomagination, and an AEE board member. “Advanced Energy Economy’s work to make the global energy system more secure, clean and affordable has never been more needed.”

“Solar energy is a huge success story, around the world and especially in the United States,” said Howard Wenger, President, Business Units, SunPower Corp., and a board member of AEE. “From rooftops to utility installations, solar is a growth business in this country, and a vital part of the advanced energy economy being created here in the United States.”

“The report reinforces what we’ve known for a long time,” said Kevin Self, vice president strategy and corporate development, Johnson Controls. “Building Efficiency is a critical and important growth sector because the outcomes including reduced operating costs, reduced energy costs, greater reliability and resilience are in high demand.”

“As this report shows, energy efficient lighting is a growing market in the United States and around the world,” said John Pouland, Vice President, Government Affairs & Solutions, Philips Electronics, an AEE member company. “Philips is proud to be a contributor to the advanced energy economy that is being created by new energy solutions.””

“This report brings to bear the knowledge of all our experts to provide the most complete picture possible of this dynamic market. Our analysis shows that advanced energy is a significant sector of the economy in the United States and the world.”

Advanced Energy Economy is a national association of businesses and business leaders who are making the global energy system more secure, clean and affordable. Advanced energy encompasses a broad range of products and services that constitute the best available technologies for meeting energy needs today and tomorrow. AEE’s mission is to transform public policy to enable rapid growth of advanced energy businesses. AEE and its State Partner organizations are active in 25 states across the country, representing roughly 1,000 organizations in the advanced energy industry. Visit Advanced Energy Economy online at: www.aee.net.