Below, we provide details on an overall carbon pricing approach and specific recommendations for key sectors in the Canadian emissions inventory, including transportation, buildings, electricity, oil and gas, and government decision-making.

More recently, research demonstrates that Canada’s emissions gap in 2030 is slightly smaller than official government estimates.11 After September 2015, a significant number of new climate policies were announced that were not taken into account in the biennial report.

These policies include Alberta’s Climate Leadership Plan, Ontario’s cap-and-trade regulation, Saskatchewan’s 50 per cent commitment for installed renewable energy capacity, and the Canada-U.S. joint commitment to regulate new and existing sources of methane emissions in their oil and gas sectors.

While these estimates provide a more up-todate assessment on the efficacy of existing and developing climate policies across
Canada, the point remains: even with all national and sub-national climate efforts to date, Canada must bring in new ambitious new policies and/or significantly increase the stringency of existing programs, to close the gap to 2030. 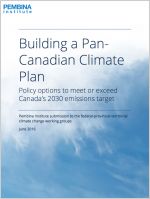