GLOBE-Net, August 3, 2015 – The recent completion of the 100 megawatt (MW) Cayuga Grand Renewable Solar Project (GRS), the largest operating solar energy project of its kind in Canada and one of the largest in North America.

Besides its many benefits in terms of reducing dependency on fossil fuel energy and producing clean energy, the project represents a significant benefit – both economic and social – to the adjacent First Nation, the Six Nations Reserve. 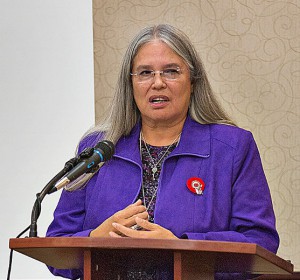 quoted in a Hamilton Spectator article said the deal is a giant leap forward in getting the community’s land rights recognized and achieving financial autonomy.

“Samsung is leasing the land from Ontario, but we get the rent,” Hill said. “It’s exciting because Ontario is acknowledging that we’re the land owners … (and) the landlords because we’re still in the struggle to get our land rights recognized.”

The Six Nations has a 10 per cent equity stake in the 404-hectare solar project and the surrounding wind farm, which will translate into payments of $27 million and $38 million, respectively, over the next 20 years.

Six Nations of the Grand River is the most populated first nation community in all of Canada and is the only place on earth where all of the six nations live together. The Six Nations Territory is 46,500 acres which is home to over 13,000 Mohawk, Cayuga, Onondaga, Oneida, Seneca and Tuscarora nation members.

“During this time, we have gotten to know each other by spending time learning about our unique cultures and leveraging these insights to achieve a mutually beneficial partnership that adds value to our collective environment,” said Hill.

“What we have achieved is a template for many more green energy projects in the Haldimand Tract. The fact that the Grand Renewable solar project provides green energy for our coming generations is a significant accomplishment for all of us to celebrate.”

The Grand Renewable Solar project will produce enough clean energy to meet the needs of over 17,000 households. Compared to coal-fired energy generation, each year the GRS project will offset approximately 162,000 tonnes of CO2, the equivalent of taking 29,610 cars off the roads.

Construction of the project began in September 2013 and was completed on schedule by a wholly owned subsidiary of Canadian Solar Inc. (Canadian Solar).

The GRS project has created significant economic benefits for the Province of Ontario. The project incorporates solar panels and inverters manufactured in Ontario by Canadian Solar and SMA, respectively and has employed hundreds of people from across the province in every aspect of the project – from manufacturing and assembly of the solar panels and inverters, to site construction, installation, and now operations.

An average of 240 workers and a peak of 450 were on site during construction, including local subcontractors that were utilized for various aspects of the project. 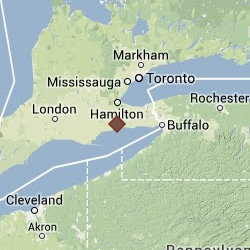 The solar farm sits on land just outside the Haldimand Tract, which stretches 10 kilometres on either side of the Grand River from north of Fergus to Lake Erie. The land was a gift to Six Nations from the British in 1784 for loyalty to the Crown during the American Revolution.

In 1995, Six Nations began to seek from the Crown of Canada a full accounting of the disposition of its land interests which originally comprised 950,000 acres of land acquired through the Haldimand Treaty of 1784. Claims regarding the land are ongoing.

In recent times, Six Nations has commenced consultation and negotiation with renewable energy proponents which has thus far generated a direct and indirect economic interest in over 400 MW of renewable energy power generation in the region.

TELUS use of Green Mortgage Bonds a North America first