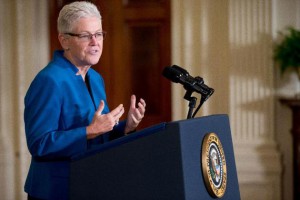 The Plan, the U.S. Environmental Protection Agency’s final rule-making on the Obama Administration’s  clean energy, will cut emissions from power plants, the largest drivers of climate change in the United States.

First proposed last year by the EPA, the new rule will lead to the closure of many coal-fired power plants and scuttle plans to open new ones.

The Clean Power Plan accelerates the transition to a clean energy future, which is happening even faster than expected, which means carbon and air pollution are already decreasing, improving public health year by year.

By 2030, the plan will cut carbon pollution from the power sector by nearly a third and additional reductions will come from pollutants that can create dangerous soot and smog, translating to significant health benefits for the American people.

“We’re the first generation to feel the impact of climate change, and the last generation that can do something about it,” said U.S. President Obama at the White House press conference this week when the plan was unveiled.

“We’re the first generation to feel the impact of climate change, and the last generation that can do something about it” U.S. President Barack Obama

The plan will face enormous political opposition and undoubtedly will be challenged in the courts, but importance changes made since the first proposals were aired for public comment have improved the likelihood that it will be accepted by key states.

“Some of those changes were made to make it more—even more, I would say—legally defensible,” said Vicki Arroyo, executive director of the Georgetown Climate Center at Georgetown University, quoted in The Atlantic. “Those changes seek to offer states more flexibility in reaching targets, particularly early in the process. They’ll have more time to comply, be able to participate in an emission-credit trading market, and receive incentives to begin the process. States’ specific targets have been recalculated in the final rule.”

“This is the most significant environmental policy we’ve seen in recent years, and also a huge catalyst for economic growth,” said Bob Keefe, executive director of Environmental Entrepreneurs (E2), a national, nonpartisan group of business leaders, investors and others who advocate for policies that are good for the economy and good for the environment.

“States now have a blueprint for building their clean energy economy,” Keefe said. “It’s up to governors to put this plan into action if they want to create jobs and drive economic growth – and help their state’s environment as well.”

By giving states the time they need to develop sound strategies the plan enables states to better assess long-term solutions, such as market approaches, renewables and energy efficiency.

The plan also includes an innovative incentive program to encourage market approaches and near-term investment in renewables and efficiency, helping the U.S. meet its international emissions goals, and laying the foundation for deeper cuts in the long term.

Americans will avoid up to 90,000 asthma attacks and spend up to 300,000 more days in the office or the classroom, instead of sick at home according to a press statement issued today. And up to 3,600 families will be spared the grief of losing a loved one too soon.

“We’re proud to finalize our historic Clean Power Plan. It will give our kids and grandkids the cleaner, safer future they deserve. The United States is leading by example today, showing the world that climate action is an incredible economic opportunity to build a stronger foundation for growth,” said McCarthy.

“The valuable feedback we received means the final Clean Power Plan is more ambitious yet more achievable, so states can customize plans to achieve their goals in ways that make sense for their communities, businesses and utilities.”

EPA’s plan reflects unprecedented public input, including more than 4.3 million public comments on the proposal, and hundreds of meetings with stakeholders. It works by building on strategies states and businesses are already using.

Today, the United States uses three times more wind and 20 times more solar energy than it did in 2009, and the solar industry added jobs 10 times faster than the rest of the economy, said the EPA statement.

The final rule establishes guidelines for states to follow in developing and implementing their plans, including requirements that vulnerable communities have a seat at the table with other stakeholders. EPA is proposing a model rule states can adopt, as well as a federal plan that the EPA will put in place if a state fails to submit an adequate plan.

Final rule, fact sheets and details about the Clean Power Plan, the final standards for new, modified and reconstructed sources and the proposed federal plan are available here/

Check here for more Q’s and A’s on the EPA rule making.