WASHINGTON//LONDON (6 July 2015) – A new report released by the Global Commission on the Economy and the Climate identifies ten key economic opportunities that could close up to 96 percent of the gap between business-as-usual emissions and the level needed to limit dangerous climate change.

The report calls for stronger cooperation between governments, businesses, investors, cities and communities to drive economic growth in the emerging low-carbon economy.

“This report shows that success is possible: we can achieve economic growth and close the dangerous emissions gap,”  Felipe Calderón, former President of Mexico and Chair of the Commission.

“The low carbon economy is already emerging. But governments, cities, businesses and investors need to work much more closely together and take advantage of recent developments if the opportunities are to be seized. We cannot let these opportunities slip through our fingers.”

The new report, Seizing the Global Opportunity: Partnerships for Better Growth and a Better Climate, shows how recent trends in the global economy – such as the dramatically falling cost of clean energy, the continuing volatility of oil prices, and the worldwide growth of carbon pricing – are building momentum for low-carbon development.

“More and more countries are committing to integrating climate action into national economic plans, from the recent G7 statement on the need to decarbonise the economy by the end of the century, to the development of low-carbon and climate resilient growth strategies in a number of developing and emerging economies”, said Lord Nicholas Stern, leading economist and Co-chair of the Commission.

“Strong economic growth that is also low-carbon is going to be the new normal.”

The Commission’s 10 recommendations include:

The Commission calculates that its recommendations could achieve up to 96 percent of the emissions reductions in 2030 that are needed to hold the rise in global temperature to under 2°C, the level which governments have pledged not to cross. 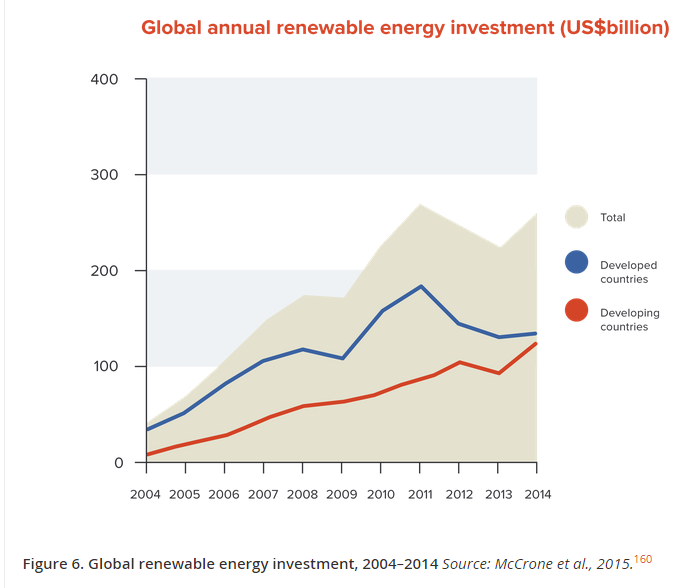 Businesses are ahead of the curve

The report finds that businesses are already driving a growing US$5.5 trillion global market for low-carbon goods and services. It calls for new business partnerships to open new markets, share costs, and reduce concerns about the international competitiveness impacts of climate policy.

“Businesses are already preparing for a low-carbon future, and in many ways are ahead of the curve. For instance, companies representing 90 percent of the global trade in palm oil, including ours, have committed to deforestation-free supply chains by 2020”, Paul Polman, CEO of Unilever.

The Commission argues that the actions identified in Seizing the Global Opportunity would enhance the national pledges (“Intended Nationally Determined Contributions,” or INDCs) already being submitted by countries to the UNFCCC for the Paris climate conference. It urges INDCs to be seen as “floors, not ceilings” to national emissions reduction targets.

“We know that the current INDC pledges are not likely to get us to the 2°C world we need. But this report shows there is significant room for stronger action that is in countries’ economic self-interest,” said Michael Jacobs, Report Director, New Climate Economy.

“It is therefore vital that the Paris climate agreement sets in motion a regular process for strengthening national commitments, on the way to the long-term goal of reducing emissions to near-zero in the second half of this century.”

“This report highlights the huge opportunity countries now have to scale up climate action while also driving growth and development,” Helen Mountford, Global Programme Director of the New Climate Economy.

“Global economic growth and carbon emissions are beginning to be decoupled: last year, for the first time in decades, emissions held steady while the global economy grew. But the pace of change needs to be accelerated if we are to meet our development goals and also reduce climate risks.”

Seizing the Global Opportunity is a follow-up to Better Growth, Better Climate: The New Climate Economy Report, which was released in September 2014. The Global Commission is made up of 28 leaders in the fields of government, business and finance from 20 countries.