Falling in love with carbon pricing

Potsdam , November 27, 2015 – Pricing CO2 could help to end the deadlock of international climate policy. Finance ministers around the world would have reason enough to favor carbon taxes or emissions trading even if they do not take into account the risks resulting from unabated greenhouse-gas emissions, a new study shows. 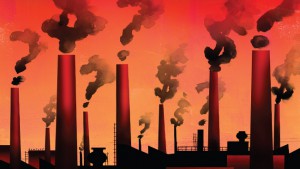 While the outcome of the world climate summit in Paris is uncertain, national governments and their economies can profit from taxing CO2 instead of taxing capital or labour – irrespective of whether or not other countries cooperate.

“Finance ministers are facing strong demand for public investments in education, security or transport – pricing CO2 turns out to be a suitable means of raising the revenues that are needed,” says Max Franks from the Potsdam Institute for Climate Impact Research (PIK), lead-author of the study.

“Finance ministers can put money into infrastructure that substantially and lastingly improves public welfare. This is something you can count in Dollars. And along the way they save the climate, since pricing CO2 yields a strong incentive to reduce emissions. You could call it a double sustainability dividend.”

In our globalized world, taxing a firm’s capital assets is difficult

In contrast, it is difficult for governments to raise additional taxes on a firm’s capital assets or on labour. “In our globalized world, it has become relatively easy for capital – and in fact for whole companies – to relocate to another, low-tax country,” says co-author Ottmar Edenhofer, chief-economist of PIK.

Payroll taxes, being the alternative, reduce consumption and can raise social issues. “We have been surprised how robust our results are,” adds Edenhofer. “No matter whether other countries are taxing emissions or if the fossil fuel market is dominated by a near-monopoly OPEC or by perfect competition, virtually all of the scenarios we computed show that CO2 pricing has a positive economic effect – even without considering the additional benefits of avoided climate change damages.”

The research is based on an innovative game theoretic model – a computer simulation that allows for strategic behavior of finance ministers on the global capital market. Additionally, the interaction between governments and its domestic private agents are modeled explicitly.

The method has already been used in previous standard economic studies. It reflects well-known empirical facts, for example tax competition in a globalized economy, which often leads to undersupply of infrastructure investments and the strategic supply on resource markets.

“Yet we found that a CO2-taxing country does not suffer from large-scale relocation of capital, because the economic effect of improving the infrastructure and hence production conditions for firms are so much greater,” explains Franks.

Paris world climate summit: pricing as a shift for the policy debate?

Importantly, however, the study yields sound findings on the conceptual level, but it can not provide information about any concrete country or concrete sums of economical gains. This would now have to be the next step for research, the authors stress.

“While at the Paris world climate summit, the debate is focused on volume targets for CO2 emission reductions, our research shows that price targets can be a most effective tool” says Edenhofer.

“For some countries, taxing CO2 would work best. Others – like the European Union and China – might rely on an emissions trading system which can have the same effect, at least if a minimum price is introduced. Despite the progress we see in expanding such pricing schemes, the welfare effect of combining it with investing the revenues in infrastructure improvements has been widely underestimated so far. It could mean an important shift for the global climate policy debate.”

**The study has been awarded with the “Best Overall Paper” at the Third Annual Conference of the Green Growth Knowledge Platform, a conference that was hosted in partnership with the United Nations Environment Programme (UNEP), the Organization for Economic Co-operation and Development (OECD) and the World Bank.**

The Human Cost of Climate Change