Most Americans are aware that food waste is a problem, are concerned about it, and say they work to reduce their own waste, but nearly three quarters believe that they waste less food than the national average, new research suggests.

The findings, from the Johns Hopkins Center for a Livable Future (CLF) at the Johns Hopkins Bloomberg School of Public Health, are significant given that 31 to 40 percent of the American food supply goes to waste, primarily in homes, stores and restaurants.  The top foods wasted, by weight, are fruits and vegetables, due in part to their perishability and bulk. Food waste costs Americans $161.6 billion annually.

A report on the research is published June 10 in the journal PLOS ONE.

“Americans perceive themselves as wasting very little food, but in reality, we are wasting substantial quantities,” says study leaderRoni Neff, PhD, director of the Food System Sustainability & Public Health Program at CLF and an assistant professor in the Bloomberg School’s Department of Environmental Health Sciences. “It happens throughout the food chain, including both a lot of waste by consumers, and a lot on our behalf, when businesses think we won’t buy imperfect food. The root causes are complex.” 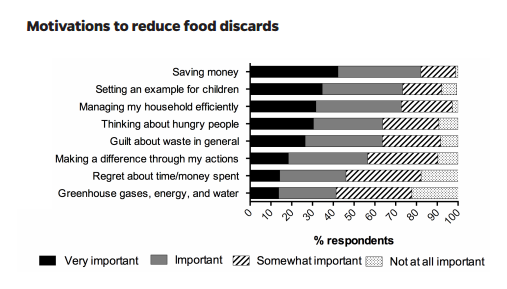 Despite the large environmental impacts related to wasted food, most survey respondents listed environmental concerns last when ranking reasons to reduce food waste, with just 10 percent calling them “very important.” Instead, respondents said that saving money and setting a positive example for children were the top motivators for wanting to throw out less food.

When listing reasons why they toss food out before eating it, consumers gave the top reasons as food safety concerns and a desire to eat only the freshest food.

While consumers should never be encouraged to eat potentially unsafe food, they can prevent waste by planning meals and portion sizes ahead, only buying and cooking what they need, working to use what they have on hand before it spoils, and freezing what they can’t use. Of note, 41 percent of those who composted were not concerned about how much food they wasted.

“The survey results are especially relevant for three groups,” Neff says. “For educators working to reduce food waste, a key finding is that highlighting financial savings may resonate more with consumers than other types of messaging.

But there is still a need to explain the environmental effects of wasting food. For policymakers, our findings suggest a priority on making date labels clear and consistent, and encoding sell-by labels so they do not mislead consumers. And for businesses, the survey highlights changes consumers want, like offering re-sealable bags and smaller product sizes, and discounting damaged or near-expiration foods.”

In 2010, wasted food cost American consumers $161.6 billion, and also placed a huge drain on the environment when approximately 30 percent of the fertilizer, 35 percent of the fresh water and 31 percent of the cropland in the U.S. was used to grow food that was eventually wasted.