Really, How important are your environmental values?

GfK asked over 28,000 people aged 15 or older across 23 countries, including over 1,000 Canadians, about how strongly they agree with specific statements. Three quarters (76%) of consumers worldwide – and 73% of Canadians – agree that brands and companies “have to be environmentally responsible these days.”

In addition, almost two-thirds (63%) of global respondents say they feel guilty when they do something that is not environmentally friendly; among Canadians, the proportion was 53% — still more than half of the population.

The same percentage (63%) claims they only buy products or services that appeal to their beliefs, values, or ideals – compared to 55% of Canadians.

Incidence of disagreement with these statements was remarkably low worldwide. Only 6% of consumers feel that brands do not have to be environmentally responsible; 14% do not feel guilty when they do something that is not environmentally friendly and 11% indicate that they buy products and services that do not appeal to their beliefs.

Global survey: Brands “have to be environmentally responsible”

Internationally, over three quarters of women (78%) and exactly three quarters of men (75%) agree that brands and companies have to be environmentally responsible. In Canada, women scored about the same (77%), but men came in significantly lower (69%). Canadians were also less likely to agree “strongly” with the statement, registering at 21% versus a global figure of 28%.

This includes close to three in ten (28%) who say they agree strongly with that statement, with women again being slightly ahead of men at 29 percent versus 26 percent.

When it comes to different age groups, there is a fairly even distribution of those in overall agreement, with the 30-39 year olds slightly ahead at 80 percent, followed by 40-49 year olds (78%) and those aged 60 and over (77%).

The youngest age group (15-19 year olds) boast over two thirds (69%) agreeing with the statement. Although they come behind the other age groups, a clear majority is still saying that brands and companies have to be environmentally responsible.

Looking at individual countries, consumers in India and Indonesia express the highest overall agreement with this statement (94% and 93% respectively). Even in those countries with the lowest levels of agreement – Japan at 58% and Sweden at 62% – we are still seeing well over half of their consumers backing this statement. 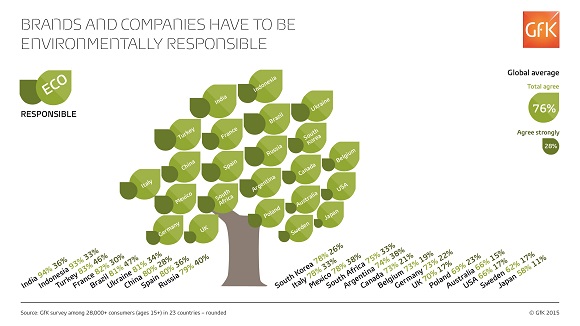 On the question of personal responsibility, nearly two thirds (63%) of consumers internationally say they feel guilty when they do something that is not environmentally friendly – including 17% who agree strongly that that is the case (compared to just 11% of Canadians). 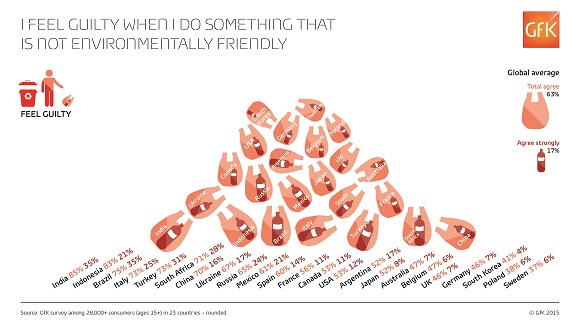 This is again slightly led by women, at 64% agreeing in total globally and 54% in Canada; for men, the figures were 61% worldwide and 52% in Canada.

Only buy things that appeal to beliefs

Globally, men and women globally are equal (63% each) in agreeing that they only buy products and services that appeal to their beliefs, values or ideals. Women are slightly more likely to say they agree strongly with this statement, at 17% worldwide (and 10% in Canada) compared to men’s 15% (7% in Canada). 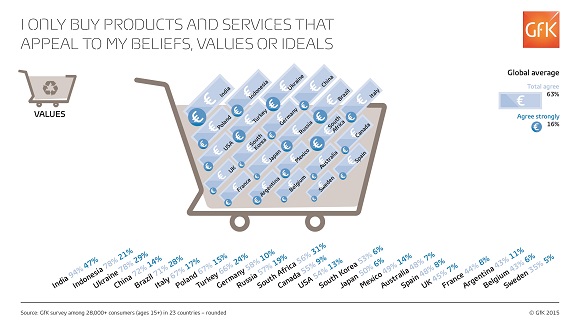 GfK is the trusted source of relevant market and consumer information that enables its clients to make smarter decisions. For more information, please visit www.gfk.com or follow GfK on Twitter: