As the battle to phase out fossil fuels heats up, finding economically viable ways to store surplus electric power is becoming vital. 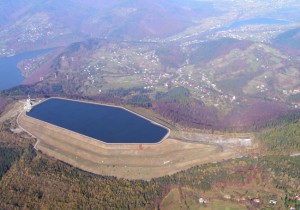 LONDON, 26 April, 2015 − Inventors are in a race to find the best way of storing electricity to make the most of renewables and cut the use of fossil fuels.

Currently, when more power than needed by consumers is produced by sources such as wind turbines or solar panels, some of the electricity is wasted. But that is changing.

Governments have realised that one of their biggest challenges in cutting the use of fossil fuels is to store surplus electricity for use at peak times.

At present, coal and gas plants are left ticking over or running at below capacity, ready to be turned on to full load to meet peak demand. This greatly adds to greenhouse gas emissions.

The UK’s Parliamentary Office of Science and Technology believes that energy storage has vast growth potential as a business opportunity, and is a key to future stable electricity supplies.

The technologies being supported in the UK, US, Japan and Germany − and in other countries where renewables are growing fast – include pumping water up hill, producing hydrogen, turning air into liquid, storing heat, compressing air, and building giant batteries.

The most widely-used method worldwide at the moment is pumped hydroelectricity storage. At periods of low demand at night and the weekend, low-cost surplus electricity is used to pump water uphill to a reservoir. During the day, the water is then released through turbines, and the electricity produced is sold at a premium rate during peak periods.

In the UK, this idea was introduced as long ago as 1963 in order to use surplus power from nuclear plants, which had to operate 24 hours a day. And now that renewables are adding to the problem of surplus energy at night, companies are finding it commercially viable to build new pump storage.

Another technology already in use is compressed air energy storage. Again using cheap electricity at off-peak times, air is pumped into underground caverns or other large-scale natural formations, and then released to drive turbines when electricity prices are high enough to make a profit. The limits to this at the moment are suitable geological formations.

Storing heat that can later be turned into electricity takes a variety of forms. Molten salt and other liquids can be heated during the day − for example, by solar power − and the heat is released at night to drive turbines. This is already being used in Spain to enable solar power to provide electricity after dark.

Another system being developed in the UK involves pumping heat away from a cold, gravel-filled container into a hot one. Reversing this drives a pump that generates electricity.

Power can also be created by cooling gas into liquids, which then generate electricity as they warm and turn back into a gas, driving turbines as they do so. Cooling air to temperatures below minus 196˚C achieves this, and is being tried in Bury, north-west England, with a five megawatt plant to test whether it is economical.

Battery storage is still potentially the simplest and best method, but building batteries big enough and of cheap enough materials to be viable is still a problem.

One of the current plans is to use parked electric vehicles as a way of storing electricity, by using their batteries − charged up at night and weekends − to release power at times of peak demand.

Because these vehicles are parked most of the time, this could work as a large reservoir of storage capacity as electric vehicles grow more common. This method of storage would also provide a use for old or discarded vehicle batteries when cars have ended their lives.

One of the challenges for large-scale batteries is to find materials that are cheap enough to store large quantities of electricity, and which can be charged and discharged thousands of times without damage. Sodium-sulphur batteries have been developed in Japan and the US for storing surplus grid electricity, and sodium-ion batteries are also being tried.

A six megawatt lithium-ion battery is being used in Leighton Buzzard, southern England, for three years to test whether it is economically viable as a balance to power supplies in the national grid.

One of the most promising areas – but still expensive – is to use surplus electricity to produce hydrogen. This has the advantage that hydrogen can provide large amounts of power quickly, is easy to transport, and has a variety of applications. It can simply be burned, or can be used to produce a chemical reaction in a fuel cell to produce power without combustion.

Some of the many other possibilities are already in use, such as storing hot water in domestic systems or district heating schemes. Hydro-electricity can also be adapted so that smaller turbines produce power only at peak times, preventing the need for fossil fuel power stations to be on stand-by.

So far, while the economics and feasibility of these schemes and many others is being tested, it is not clear if all of them will eventually be used, or whether other ideas will prove more attractive. What is certain is that more money and time than ever before is being invested in finding out. – Climate News Network