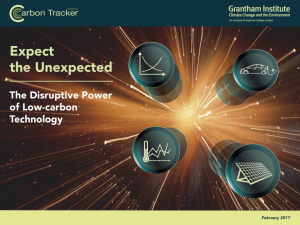 LONDON/NEW YORK, February 2, 2017 – Falling costs of electric vehicle and solar technology could halt growth in global demand for oil and coal from 2020, a new report co-authored by the Grantham Institute at Imperial College London and the Carbon Tracker Initiative launched on Thursday finds, challenging the wisdom of backing fossil fuel expansion.

The scenario analysis warns that big energy companies are seriously underestimating low-carbon advances with a business-as-usual (BAU) approach, and that stranding of fossil fuel assets is likely as the low- carbon transition gathers pace.

Growth in electric vehicles (EVs) alone could lead to 2 million barrels of oil per day (mbd) being displaced by 2025 – the same volume that caused the oil price collapse in 2014-15. This scenario sees 16mbd of oil demand displaced by 2040 and 25mbd by 2050, in stark contrast to the continuous growth in oil demand expected by industry.

“Electric vehicles and solar power are game-changers that the fossil fuel industry consistently underestimates. Further innovation could make our scenarios look conservative in 5 years’ time, in which case the demand misread by companies will have been amplified even more,” said Luke Sussams, senior researcher at Carbon Tracker.

The power and road transport sectors account for approximately half of fossil fuel consumption, so growth in solar photovoltaic (PV) and EVs can have a major impact on demand.

The report argues that the use of BAU scenarios should be retired. Scenarios should now apply, as a minimum, the latest cost reduction projections for solar PV and EVs, along with emissions commitments nations have made in their Nationally Determined Contributions (NDCs) under the Paris Climate Agreement, to reflect the current state of the low-carbon transition.

This new “starting point” scenario more accurately reflects the current state of play and finds that:

Expect the unexpected: The disruptive power of low-carbon technology, warns that fossil fuels may lose 10% of market share to PV and EVs within a single decade — this may not sound much but it can be the beginning of the end once demand starts to decline. A 10% loss of power market share caused the collapse of the US coal mining industry and Europe’s five major utilities lost more than €100 billion in value from 2008 to 2013 because they were unprepared for an 8% growth in renewable power, of which solar PV was a big part.

“There is no more business as usual in the energy sector – so it is time that scenario was discarded. There are a number of low-carbon technologies about to achieve critical mass decades before some companies expect,” said James Leaton head of research at Carbon Tracker.

The report provides full transparency on the assumptions underlying its scenario analysis, as recommended by the Financial Stability Board’s Taskforce on Climate-related Financial Disclosures. It calls for companies to start doing the same to enable the market to understand the basis for business as usual strategies.

The report explores how plausible advances in solar PV and EVs could impact on future fossil fuel demand alongside efforts to reach international climate targets. It models a range of scenarios using the latest data and market projections for future cost reductions in PV and EVs, with varying levels of global climate policy effort and energy demand. Emerging technology, such as printable PV, could even make the scenarios used in the study look conservative in a few years’ time.

“Most low-carbon pathways analysis considers what needs to be done to meet ambitious climate targets like 2oC. Here we’ve looked at what would happen to the global energy system and global temperature if the lowest-cost options are deployed, in light of the latest projections of PV and EV costs. It’s time we fully understood the implications of these technologies’ relentless ride down the cost curve,” said Ajay Gambhir senior research fellow at Imperial.

SOLAR PV – The cost of solar PV has fallen 85% over the last seven years and this study’s starting point scenario sees it becoming “materially cheaper than alternative power options globally” with a huge build-out adding more than 5000GW of capacity between 2030 and 2040. “In such a scenario of rapid change, the mass stranding of downstream fossil fuel assets is highly likely,” it says.

ELECTRIC VEHICLES – EVs are currently growing 60% year-on-year and there are already more than a million on the roads. Battery costs have fallen 73% to $268/kWh in the seven years to 2015 according to the US Department of Energy, and Tesla, the electric car maker, predicts they will reach $100/kWh by 2020. Our scenarios assume that EVs are cheaper than conventional ICEs from 2020.

The report finds that EVs could have a fifth of the road transport market by 2030 and, with additional growth in hydrogen cars and oil/electric hybrids, conventional ICEs could account for less than half the market. By 2050 EVs could grow to 1.7 billion (69% of the market) while ICEs would make up just 12%.

CLIMATE CHANGE – If the international response to climate change is stronger than NDC commitments then market trends in solar PV and EVs could help limit global warming to 2.2°C to 2.4°C (50% and 66% probabilities) by 2100.

INTERACTIVE TOOL: There is an accompanying online interactive dashboard so readers can delve into the scenario results. This will be live after the embargo lifts at: carbontracker.org/expect-the-unexpected-dashboard

About Carbon Tracker
The Carbon Tracker Initiative is a not-for-profit financial think tank that seeks to promote a climate-secure global energy market by aligning capital markets with climate reality. Our research to date on unburnable carbon and stranded assets has begun a new debate on how to align the financial system with the energy transition to a low carbon future. www.carbontracker.org