Race is on to feed warming world 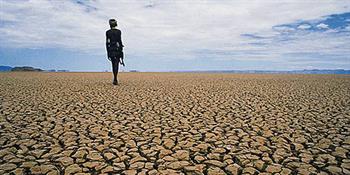 LONDON, 22 June, 2016 – It can take up to 30 years to improve a crop variety, test it and persuade farmers to adopt it. That means the speed of climate change in Africa could make a new variety of maize useless even before the first harvest, according to new research.

But two separate studies that address the challenge of food security in a rapidly warming world suggest that the answers may lie not just in future weather but in today’s soils.

One says that better soil data can be used to predict surer levels of yield. The other recommends a technique perfected at least 700 years ago in West Africathat converts nutrient-poor tropical soil to fertile and nourishing black earth.

Andy Challinor, professor of climate impacts at the University of Leeds in the UK, has already warned that climate change could have a dramatic impact on African farmland.

Now he and colleagues report in Nature Climate Change that there must be immediate action to speed up the development of new and improved varieties of maize and other crops.

“In Africa, gradually rising temperatures and more droughts and heatwaves caused by climate change will have an impact on maize,” he warns.

“We looked in particular at the effect of temperature on crop durations, which is the length of time between planting and harvesting. Higher temperatures mean shorter durations, and hence less time to accumulate biomass and yield.”

This good/bad combination of swifter growth but lower nutritional substance is on the way. In some cases, the researchers found that crop duration could become significantly shorter as early as 2018, and by 2031 in most of the maize-growing regions of Africa.

It took a very optimistic assessment – one in which farming, policy, markets and technology all worked together to deliver new varieties in a decade – to deliver a prediction of crops that could keep pace with rising temperatures between now and 2050.

The Leeds scientists want to see new crops developed in greenhouses already set to temperatures predicted for the decades ahead, as greenhouse gas emissions continue to rise and continue to drive global average temperatures ever higher.

Prof Challinor says: “The challenge here is knowing what future emissions will be, and ensuring that climate models can produce accurate enough information on future temperatures based on these emissions.” .

At the International Institute for Applied Systems Analysis (IIASA) in Austria, researchers have been testing computer simulations that factor climate and weather variation, irrigation, fertiliser and soil type to model the future.

They report in Nature Communications that soil type − especially where fertiliser use was limited − turned out to be more important than even year-to-year changes in rainfall and temperature.

Study leader Christian Folberth, research scholar in IIASA’s ecosystem services and management programme, says: “In extreme cases, climate change impacts on yield can be either negative or positive, depending on the soil type chosen for the simulation.

“This has big implications for any recommended changes in crop and soil management to better adapt to future climate impacts.”

But some African farmers understood the principles of soil management long before the scientific revolution in agriculture, according to new research in Frontiers in Ecology and the Environment.

James Fairhead, professor of social anthropology at the University of Sussex, UK, and colleagues report that they analysed a range of sites in West Africa – 150 in northwest Liberia and 27 in Ghana.

They found that leached and nutrient-starved tropical forest soils had been transformed, in some cases almost seven centuries ago, into enduringly fertile loams by the addition of black carbon and kitchen scrap. These cultivated patches contained two to three times as much organic carbon as other soils and were better suited to intensive farming.

Other researchers have identified similar techniques in Amazon soils that date from long before the European discovery of America.

“Mimicking this ancient method has the potential to transform the lives of thousands of people living in some of the most poverty-stricken and hunger-stricken regions of Africa,” Professor Fairhead says.

“More work needs to be done, but this simple, effective farming practice could be an answer to major global challenges, such as developing ‘climate-smart’ agricultural systems that can feed growing populations and adapt to climate change.” – Climate News Network

Why the right climate target was agreed in Paris

Share your views on improving Canada’s environmental and regulatory processes