Why the right climate target was agreed in Paris

Potsdam Institute for Climate Impact Research, June 23, 2016 – While some criticize the Paris climate target as impracticable, a team of scholars argues that it is – on the contrary – a triumph of realism.

First, and most importantly, adhering to the Paris target of keeping global warming well below 2 degrees Celsius is necessary in view of the massive risks that unchecked climate change would pose to society.

A crucial type of threats, associated with the crossing of tipping points in the Earth system, is summarized in a landmark map for the first time. Second, implementing the Paris target is feasible through the controlled implosion of the fossil industry, instigated by a technological explosion related to renewable energy systems and other innovations.

Third, the target is simple enough to create worldwide political momentum, the scientists say in their comment published in Nature Climate Change.

“The Paris target of limiting global temperature increase to well below 2 degrees Celsius, aspiring to keep the warming even at 1.5 degrees, offers the chance to avoid some of the greatest climate risks – the tipping of critical Earth system elements,” says co-author Ricarda Winkelmann from the Potsdam Institute for Climate Impact Research (PIK).

“The ice sheets or the Amazon rainforest, for instance, are projected to succumb to disruptive and likely irreversible change once a certain warming threshold range is crossed. These are not isolated processes; they affect the whole planet.”

Based on the advances made by climate research as a whole over the past two decades, the scientists provide a defining diagram of tipping elements in the context of the global temperature evolution. ”We illustrate that for the Earth system, half a degree really matters,” Winkelmann says.

Warming of only 1.5 degrees above preindustrial levels will have major consequences, such as threatening the survival of coral reefs worldwide. But the difference to 2 degrees is substantial. In a 1.5-degree warmer world, for example, global sea-level rise could be limited to 1.5 meters by the year 2300, whereas at 2 degrees, 2-3 meters rise by 2300 have been projected, and the Greenland ice sheet may well pass its tipping point.

“Beyond 2 degrees, the course might be set for a long-term complete deglaciation of the Northern Hemisphere,” says Winkelmann. ”This would result in sea-level rise that threatens the survival of many major coastal cities including New York, Mumbai and Tokyo. Hence the necessity of the Paris target.”

“While the latest IPCC assessment has shattered the infeasibility myth, showing that the 2 degrees guardrail can be respected at relatively low cost with the proper political resolve,” says co-author Stefan Rahmstorf, head of Earth System Analysis at PIK, “almost all IPCC scenarios assume so-called negative emissions – taking CO2 out of the atmosphere and storing it. That is a very long shot. However, the price decrease and the efficiency increase of wind and solar power have been beyond the most optimistic predictions.”

A technical explosion of renewables would, once the new technologies reach a market penetration of 15-20 percent, lead to an implosion of the fossil industry, the scientists argue. Currently, India appears to be very serious about implementing its colossal renewables target – an example of self-amplifying developments that have the potential to tip the global market scales.

In addition, a strong climate agreement paves the way towards carbon pricing instruments that will be adopted in more and more countries, the authors say. Last but not least, issues of morality are going to interfere with economics – one case in point is the divestment campaign which aims at pulling assets out of fossil businesses. Already today, key financial market players like the German Allianz insurance, the French company AXA or the legendary US oil dynasty Rockefeller are moving in that direction.

“Beyond necessity and feasibility, the 2°C guardrail has a comparative advantage over competing targets that cannot be overrated in the world of ‘realpolitik’: it is easy to grasp and communicate,” says lead author Hans Joachim Schellnhuber, director of PIK. “In fact, the target strikes the optimal balance between concreteness and intelligibility.

Now the world of climate action turns around one single number!” In the days and nights of the Paris negotiations, the 2 degrees concept – originating from a 1995 report by the German government advisory council for environmental issues (WBGU)  – proved its worth since every national delegation could take a stance for the temperature limit of its choice. This would have been hard to imagine with the more complicated target suggestions made recently – ocean heat content, CO2 equivalent greenhouse gas atmospheric concentrations, or temperature change rate.

“The Paris agreement is a historic achievement and a genuine triumph of reason,” Schellnhuber concludes. “Now the pressure is on to implement that consensus in time, in order to avoid the looming humanitarian tragedy for good.” 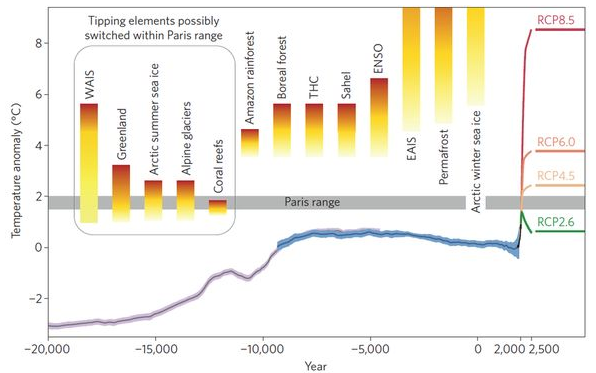 Figure 1, Schellnhuber et al (2016): Tipping elements in context of the global mean temperature evolution. Shown is the global mean surface temperature evolution from the Last Glacial maximum through the Holocene, based on palaeoclimatic proxy data (light grey), instrumental measurements since 1750 ad (HadCRUT data, black line) and different global warming scenarios for the future. Threshold ranges for crossing various tipping points where major subsystems of the climate system are destabilized have been added. (Note that we follow the tipping point definition of Lenton et al. which does not require irreversibility, so that sea ice cover is included here.) The range for the Western Antarctic Ice Sheet (WAIS) has been adapted to account for the observation that part of it has probably tipped already. THC, thermohaline circulation; ENSO, El Niño–Southern Oscillation; EAIS, Eastern Antarctic Ice Sheet. For references, see the paper.

Race is on to feed warming world