25 October 2016 –  The International Energy Agency said today that it was significantly increasing its five-year growth forecast for renewables thanks to strong policy support in key countries and sharp cost reductions. Renewables have surpassed coal last year to become the largest source of installed power capacity in the world.

The latest edition of the IEA’s Medium-Term Renewable Market Report now sees renewables growing 13% more between 2015 and 2021 than it did in last year’s forecast, due mostly to stronger policy backing in the United States, China, India and Mexico. Over the forecast period, costs are expected to drop by a quarter in solar PV and 15 percent for onshore wind.

Last year marked a turning point for renewables. Led by wind and solar, renewables represented more than half the new power capacity around the world, reaching a record 153 Gigawatt (GW), 15% more than the previous year. Most of these gains were driven by record-level wind additions of 66 GW and solar PV additions of 49 GW.

“We are witnessing a transformation of global power markets led by renewables and, as is the case with other fields, the center of gravity for renewable growth is moving to emerging markets,” said Dr Fatih Birol, the IEA’s executive director.

There are many factors behind this remarkable achievement: more competition, enhanced policy support in key markets, and technology improvements. While climate change mitigation is a powerful driver for renewables, it is not the only one. In many countries, cutting deadly air pollution and diversifying energy supplies to improve energy security play an equally strong role in growing low-carbon energy sources, especially in emerging Asia.

Over the next five years, renewables will remain the fastest-growing source of electricity generation, with their share growing to 28% in 2021 from 23% in 2015.

But while 2015 was an exceptional year, there are still grounds for caution. Policy uncertainty persists in too many countries, slowing down the pace of investments. Rapid progress in variable renewables such as wind and solar PV is also exacerbating system integration issues in a number of markets; and the cost of financing remains a barrier in many developing countries. And finally, progress in renewable growth in the heat and transport sectors remains slow and needs significantly stronger policy efforts.

The IEA also sees a two-speed world for renewable electricity over the next five years. While Asia takes the lead in renewable growth, this only covers a portion of the region’s fast-paced rise in electricity demand. China alone is responsible for 40% of global renewable power growth, but that represents only half of the country’s electricity demand increase.

This is in sharp contrast with the European Union, Japan and the United States where additional renewable generation will outpace electricity demand growth between 2015 and 2021.

The IEA report identifies a number of policy and market frameworks that would boost renewable capacity growth by almost 30% in the next five years, leading to an annual market of around 200 GW by 2020. This accelerated growth would put the world on a firmer path to meeting long-term climate goals.

“I am pleased to see that last year was one of records for renewables and that our projections for growth over the next five years are more optimistic,” said Dr. Birol. “However, even these higher expectations remain modest compared with the huge untapped potential of renewables. The IEA will be working with governments around the world to maximize the deployment of renewables in coming years.”

The Medium-Term Renewable Energy Market Report 2016 also assesses the potential impact of enhanced policy action for the electricity sector under its “accelerated case”, which would position the world firmly on a path to a more sustainable and secure energy system. 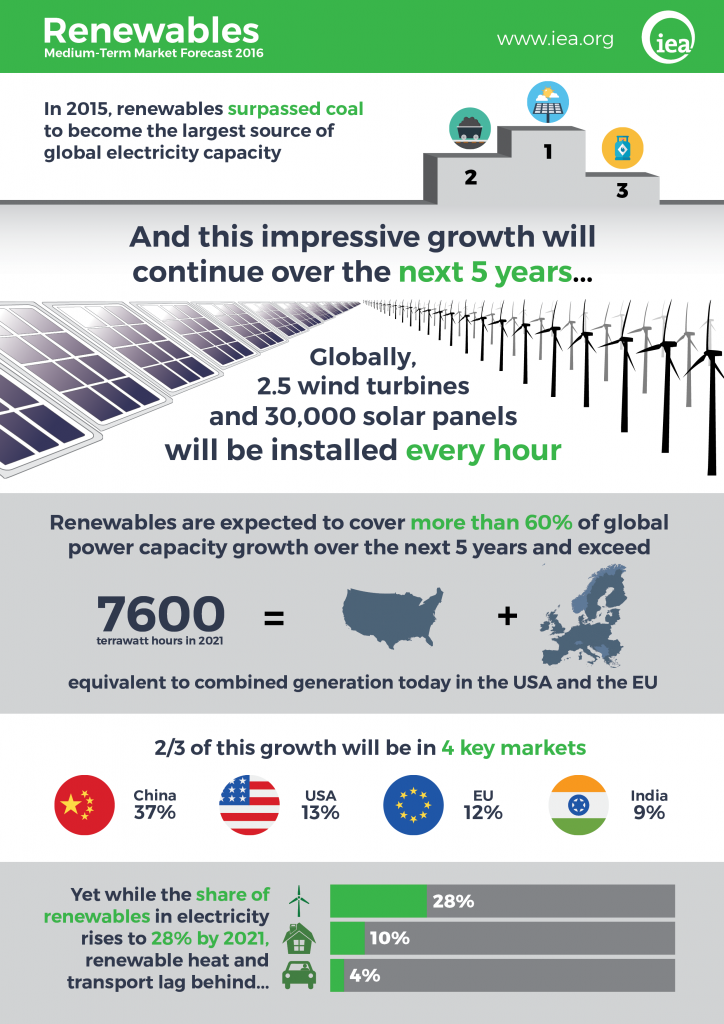