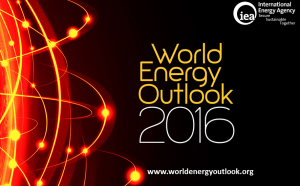 PARIS, 16 November 2016 – As a result of major transformations in the global energy system that take place over the next decades, renewables and natural gas are the big winners in the race to meet energy demand growth until 2040, according to the latest edition of the World Energy Outlook, the International Energy Agency’s flagship publication.

A detailed analysis of the pledges made for the Paris Agreement on climate change finds that the era of fossil fuels appears far from over and underscores the challenge of reaching more ambitious climate goals. Still, government policies, as well as cost reductions across the energy sector, enable a doubling of both renewables – subject of a special focus in this year’s Outlook – and of improvements in energy efficiency over the next 25 years. Natural gas continues to expand its role while the shares of coal and oil fall back. 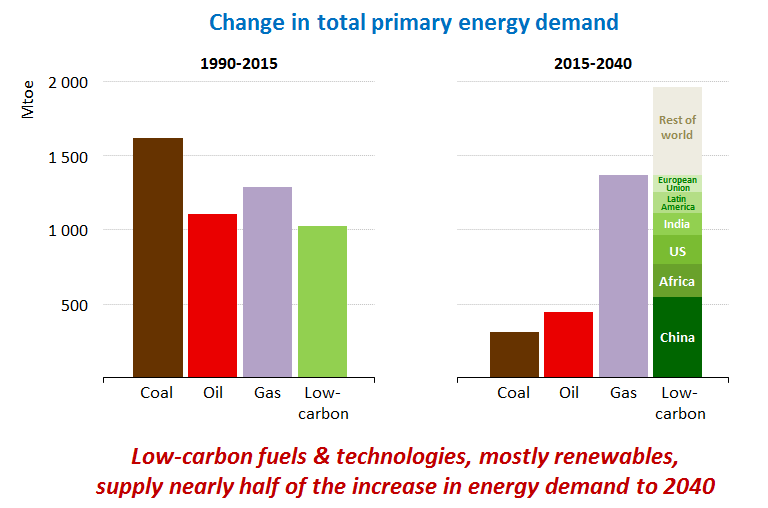 “We see clear winners for the next 25 years – natural gas but especially wind and solar – replacing the champion of the previous 25 years, coal,” said Dr Fatih Birol, the IEA’s executive director. “But there is no single story about the future of global energy: in practice, government policies will determine where we go from here.”

This transformation of the global energy mix described in WEO-2016 means that risks to energy security also evolve. Traditional concerns related to oil and gas supply remain – and are reinforced by record falls in investment levels. The report shows that another year of lower upstream oil investment in 2017 would create a significant risk of a shortfall in new conventional supply within a few years. 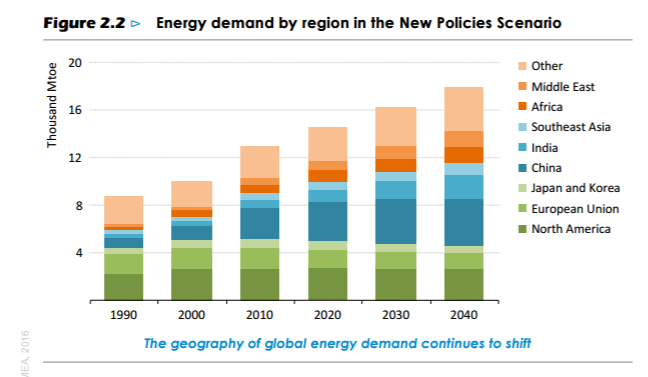 In the longer-term, investment in oil and gas remain essential to meet demand and replace declining production, but the growth in renewables and energy efficiency lessens the call on oil and gas imports in many countries. Increased LNG shipments also change how gas security is perceived. At the same time, the variable nature of renewables in power generation, especially wind and solar, entails a new focus on electricity security.

“We are entering a period of greater oil price volatility,” said Dr. Birol. “If oil prices rise in the short term, then shale producers can react quite quickly to put more oil on the market, producing a see-saw movement. And if we continue to see subdued investments in new conventional oil projects, this could have profound consequences in the longer term.”

Global oil demand continues to grow until 2040, mostly because of the lack of easy alternatives to oil in road freight, aviation and petrochemicals, according to WEO-2016. However, oil demand from passenger cars declines even as the number of vehicles doubles in the next quarter century, thanks mainly to improvements in efficiency, but also biofuels and rising ownership of electric cars.

Oil demand from passenger cars declines even as the number of vehicles doubles in the next quarter century, thanks mainly to improvements in efficiency, but also biofuels
and rising ownership of electric cars.

Coal consumption barely grows in the next 25 years, as demand in China starts to fall back thanks to efforts to fight air pollution and diversify the fuel mix. The gas market is also changing, with the share of LNG overtaking pipelines and growing to more than half of the global long-distance gas trade, up from a quarter in 2000. In an already well-supplied market, new LNG from Australia, the United States and elsewhere triggers a shift to more competitive markets and changes in contractual terms and pricing.

The Paris Agreement, which entered into force on 4 November, is a major step forward in the fight against global warming. But meeting more ambitious climate goals will be extremely challenging and require a step change in the pace of decarbonization and efficiency. Implementing current international pledges will only slow down the projected rise in energy-related carbon emissions from an average of 650 million tonnes per year since 2000 to around 150 million tonnes per year in 2040. 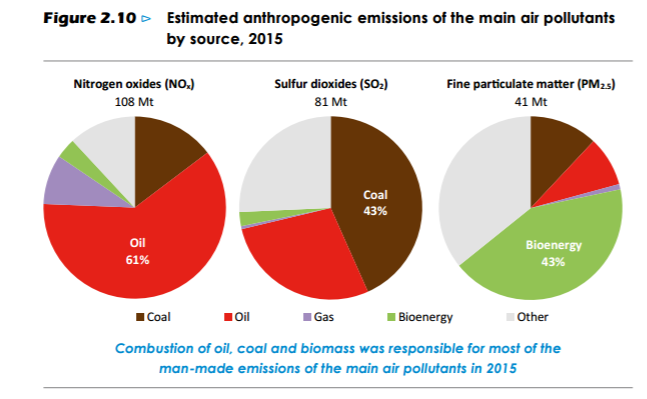 While this is a significant achievement, it is far from enough to avoid the worst impact of climate change as it would only limit the rise in average global temperatures to 2.7°C by 2100. The path to 2°C is tough, but it can be achieved if policies to accelerate further low carbon technologies and energy efficiency are put in place across all sectors.

Current pledges fall short of limiting the temperature increase to below 2 °C;  raising ambition to 1.5 °C is uncharted territory

It would require that carbon emissions peak in the next few years and that the global economy becomes carbon neutral by the end of the century. For example, in the WEO-2016 2°C scenario, the number of electric cars would need to exceed 700 million by 2040, and displace more than 6 million barrels a day of oil demand. Ambitions to further limit temperature gains, beyond 2°C, would require even bigger efforts.

“The next frontier for the renewable story is to expand their use in the industrial, building and transportation sectors where enormous potential for growth exists.”