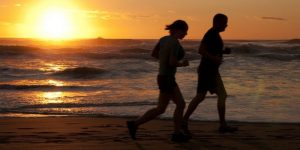 LONDON, 14 November, 2016 – And now, fashion’s latest take on the idea of smart clothes: a fabric that manages its own energy needs.

Just the thing for that run in the sun, a T-shirt that harvests the energy from solar radiation, while at the same time scavenging the mechanical energy from its own movement so it can store that electric power in its own battery fabric.

The latest sportswear fashion parade from designers in China and the US presents a three-way fabric that incorporates interwoven fibres that serve as solar cells, nanogenerators and supercapacitors. The day of the wearable electronic device is at hand.

Zhong Lin Wang, director of the Centre for Nanostructure Characterisation at Georgia Institute of Technology in the US, has already announced the coming of the power-dressing revolution.

Burst of ingenuity
A separate group at the University of Wisconsin-Madison has just delivered the first tests of tribo-electric floorboards that recover the energy of a footfall.

Each of these is just one instance of the global burst of ingenuity as laboratories and universities look at new ways to generate energy, or to conserve it, or to recycle it, in response to the menace of climate change driven by global warming as a consequence of the combustion of fossil fuels.

“Since all the components in our new system are
shaped like fibres, they can easily be woven
into electronic textiles to make smart clothes
for driving wearable devices”

None of these innovations is ready for market. Most of them are still at the prototype stage, and the three fabrics so far have been trialled as patches on a T-shirt rather than as an integral garment.

But now Professor Wang’s team and their research partners at institutions in Hangzhou, Suzhou, Chongqing and Beijing in China and in Taipei, Taiwan, report in Science Advances journal that they have actually road-tested a wearable that collects two types of energy.

It then stores them both in its own fibres, to power a light-emitting diode, or a skin sensor. And they promise that, one day, such fabrics could power a smart watch, or an MP3 music player.

Mechanical energy
The research began with what is likely to become known as TENG (tribo-electric nanogenerator) technology.

But the same ingenious manipulation of new materials at the scale of billionths of a metre – in a word, nanotechnology – to scavenge the mechanical energy of movement and convert it to power also yielded flexible fibres that could double as solar cells that could convert the sun’s rays into electric current.

The next trick was to find a way to store the harvested power as chemical energy in a supercapacitor that could be shaped as a fibre.

“Since all the components in our new system are shaped like fibres, they can easily be woven into electronic textiles to make smart clothes for driving wearable devices,” Professor Wang says.

“We are also looking into how durable the structure is and hope to make it washable.” – Climate News Network

Aid for agriculture and climate adaptation