June 1, 2015 – Three-quarters of the world’s annual emissions of greenhouse gases are now limited by national targets, according to a new study published today by the Grantham Research Institute on Climate Change and the Environment at London School of Economics and Political Science.

The study, led by Michal Nachmany and  Sam Fankhauser, points out that 53 countries, including the 28 Member States of the European Union, have national targets that set either absolute or relative limits on annual emissions of greenhouse gases across their economies.

Lead author of the study, Michal Nachmany, said: “With three-quarters of the world’s greenhouse gas emissions now covered by national targets, we can be more confident about the credibility of the pledges that countries will make ahead of the crucial United Nations summit in Paris in December this year.

While collectively these pledges are unlikely to be consistent with the international goal of avoiding global warming of more than 2 centigrade degrees, the existence of national legislation and policies should provide the opportunity for countries to strengthen the ambition of their emissions cuts after the summit.”

Professor Fankhauser said: “Every five or so years the number of climate laws and policies across the world has doubled. This growing amount of legislation provides evidence that the world’s major emitters are taking serious steps to tackle climate change in their countries. By writing their intentions into law, the world’s leaders have shown that international climate change talks do lead to national action in the vast majority of countries.”

In addition, 47 countries, including the 28 Member States of the European Union, have introduced carbon pricing through either a carbon tax or a cap-and-trade system. 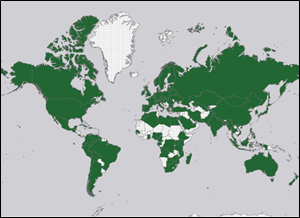 Since 1997, the number of climate change laws and policies has doubled every 5 years 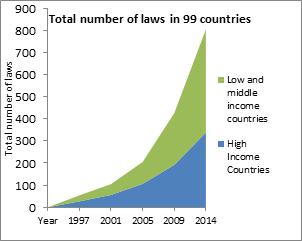 Approximately half of those (398) were passed by the legislative branch, and half (408) by the executive branch (e.g. policies, decrees). 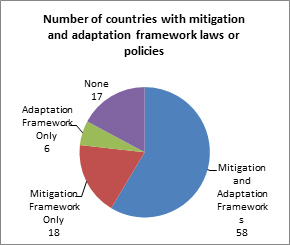 Framework legislation has been defined as a law or regulation with equivalent status, which serves as a comprehensive, unifying basis for climate change policy, addressing multiple aspects or areas of mitigation or adaptation (or both) in an overarching manner.

Frameworks have been shown to encourage a strategic approach to climate policy and generate further policy action.

17 countries do not have any climate framework legislation. 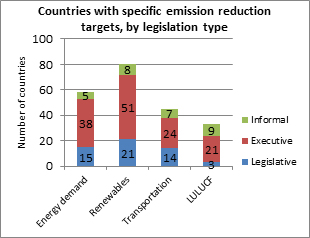 45 countries (including the EU as a block) have economy wide targets to reduce their emissions. Together they account for over 75 per cent of global emissions.

86 countries have specific targets (for renewable energy, energy demand, transportation or LULUCF). 80 per cent of countries have renewable targets; the majority of them are executive policies.

The study is intended as a source of information for legislators, researchers and policy-makers. Facilitating knowledge exchange among parliamentarians was one of the primary motivations behind the Climate Legislation Study when the series was conceived by the Grantham Research Institute, LSE and GLOBE International in 2010.

The study includes detailed country chapters with a full list of laws for each of the 99 countries covered, a set of country fact sheets with key indicators, and the complete database of over 800 climate-related laws: