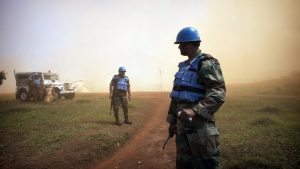 LONDON, 18 September, 2016 – A group of senior defence experts in the US has warned that climate change is a threat to the country’s security, with the stark message that “the impacts of climate change present significant and direct risks to US military readiness, operations and strategy”.

They are members of the Climate Security Consensus Project, a bipartisan group of 25 senior military and national security experts − many of whom have served in previous Republican or Democratic administrations.

Meeting at a forum in Washington DC organised by the Centre for Climate and Security (CCS), the group said the effects of climate change “present a strategically-significant risk to US national security and international security”.

A statement from the members, who include retired senior officers from the US Army, Air Force, Navy and Marine Corps, expresses concern about risks to regions of the world of strategic significance to Washington – “risks that can contribute to political and financial instability on an international scale, as well as maritime insecurity”.

They say stresses resulting from climate change can increase the likelihood of conflict within and between countries, state failure, mass migration, and the creation of additional ungoverned spaces.

These could develop “across a range of strategically-significant regions, including but not limited to the Middle East and North Africa, Central Asia, the Indo-Asia-Pacific and the Arctic regions”.

They also fear that the impacts of climate change “will place significant strains on international financial stability through contributing to supply line disruptions for major global industries. . . disrupting the viability of the insurance industry, and generally increasing the political and financial risks of doing business in an increasingly unstable global environment”.

There’s absolutely nothing political about climate change. It’s a security risk, it makes other security risks worse, and we need to do something big about it”

Supporting their statement are two documents released at the forum, which the organisers said together urged “a robust new course on climate change”.

Francesco Femia and Caitlin Werrell, co-presidents of the CCS, said: “These reports make it crystal clear. To national security and defence leaders, there’s absolutely nothing political about climate change. It’s a security risk, it makes other security risks worse, and we need to do something big about it.”

One of the reports − on sea level rise and the US military − says a growing number of studies exploring the actual and potential physical impacts of sea level rise on US military installations “show that the risks are increasing at a faster rate than expected”.

The stability of the 1,774 US military sites spread worldwide along 95,471 miles of coastline “is set to change dramatically due to sea level rise and storm surge. . .

“We cannot wait for perfect information before assessing the risks and impacts. . . Essentially, the very geostrategic landscape in which the US military operates is going to be different from what it is today.”

The second report, described as a briefing book for a new administration, recommends ways to address the security risks of a changing climate. The first of these urges the new president to appoint a cabinet-level official to lead on domestic climate change and security issues.

This is not the first time that the CCS has voiced its concerns about the security risks posed to the US by climate change.

What is notable this time is the group’s emphasis, during a bitterly divisive presidential election campaign, on the bipartisan nature of its work. Its language is uncompromising, and its insistence that there is “absolutely nothing political about climate change” will antagonise many Americans and reassure many more.

The presidential election in less than two months from now will see two viscerally-opposed contenders for the White House pushing diametrically different views on climate change, as well as many other issues.

Democrat candidate Hillary Clinton has said the science is “crystal clear”, and that climate change is an “urgent threat”.

But Republican candidate Donald Trump wrote this month: “There is still much that needs to be investigated in the field of ‘climate change’.” He has described it as a hoax invented by the Chinese, and earlier this year called it “bullshit”. – Climate News Network