“The massive costs and damages to Vancouver resulting from climate change and sea level rise can’t be ignored,” said Mayor Gregor Robertson in a statement.

Despite best efforts to locally mitigate the impacts of climate change, scientists project that sea level rise will pose a significant challenge to coastal cities across the world over the next century and beyond.

“Sitting on the sidelines is not an option while climate change threatens our future,” said Mayor Robertson. . “By taking action today to protect our land, environment, people’s homes, and our iconic landmarks from climate change impacts, we’re making our city more resilient and saving billions of dollars in the long run.” 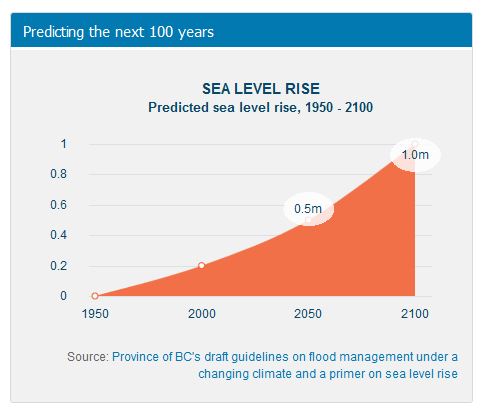 Where and how to respond

A report completed earlier this year and identified possible options for responding to coastal flood risk in eleven distinct areas of Vancouver’s coastline including:

While the flood risk today and in the short term is limited to a few areas of the city, the flood risk increases through time as we add sea level rise to the equation.

In 2017, the City will begin engaging with neighbourhoods that will be the most impacted by sea level rise in the near future to identify the best adaptation options.

Response options originated from international examples, literature, and expert opinion on what could be done in the Vancouver context and generally fall into three categories:

Phase 2 also looked at the potential timing of flood risk in order to recommend when interventions should occur and proposes an adaptive management framework to monitor and re-assess over time.

These findings will provide the basis for a future sea level response plan to address sea level rise over the next century, with medium- and long-term actions that complement the our existing climate change mitigation strategies.

These findings will be incorporated into the planning of future coastline projects. This will ensure the building and planning of resilient infrastructure, and neighbourhoods, and preserve the ability to implement flood management interventions when needed in the future.

Around the world, flood-related impacts of climate change are causing billions of dollars in damage. Many cities are now taking proactive measures to prevent increased flooding and damage costs down the road.

Earlier this year the Fraser Basin Council concluded that flood scenarios on the Fraser River and coastal areas would trigger the most costly natural disaster in Canadian history if no proactive measures are taken. Estimated costs are between $19.3 billion and $32.7 billion in direct losses.

Vancouver has been recognized as a North American leader on climate change mitigation for over a decade, noted the Mayor.

“In addition to a host of mitigation strategies in place, we are already actively adapting to climate change with initiatives including sewer separation, water conservation, green building standards, flood-proofing guidelines for new developments, and hot weather preparedness strategies.”