January 11, 2016 – ­­Some 6.2 gigatonnes worth of emission allowances and offsets were traded globally in 2015 according to the latest Thomson Reuters’ assessment of the world’s carbon markets in 2015 and forecast for 2016-2018.

Seen as a whole, the world of carbon trading was characterized by two opposite trends in 2015: volumes continued to contract and prices continued to increase. Traded volume dropped by 19 percent, from 7.6 Gt CO2 worth of transactions in 2014 to 6.2 Gt in 2015. The overall turnover increased 9 percent from €44.3 to €48.4 billion. 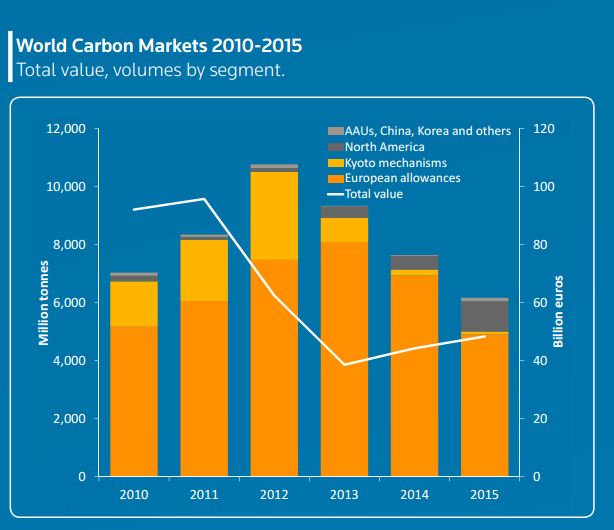 Traded volumes contracted 19% from 2014 but because of higher prices in most markets, the total value increased 9% to €48.4 billion.

The North American markets grew 121% in terms of volume and 220%. in terms of value. Transport fuel emissions were included in California.

European volumes continued to drop in 2015, partly because of the ongoing ‘backloading’ (withholding of auction volumes), partly because of lower price volatility. Looking forward Thomson Reuters expects volumes to rise slightly in 2016.

Europe remains by far the dominant market, with 80 percent of the volume and 77 percent of the value. European volumes, at 5 Gt, dropped for a second consecutive year, from its peak level of 8.1 Gt in 2013.

Assuming prices to also end higher than in 2015, it is forecast that the overall value of carbon markets will grow by a quarter.

Emission trading will remain modest in China and South Korea, despite the huge emission volumes covered by their emission trading schemes. In terms of transactions, Europe and North America will continue to represent more than 95%.