Where does Canada Rank on Coal Phase Out Actions?

21 October 2015 – Bonn: The first ever assessment on progress towards ending reliance on coal power across the G7 ranks the U.S.A as leading a clear move away from coal evident across all G7 members with one exception. Japan is ranked last in seventh place, standing in isolation, with over 27GW of additional coal power capacity planned.

Canada is ranked #4 in the E3G G7 coal phase out scorecard. Coal use in power generation accounts for 8.4% of Canada’s CO2 emissions while producing 10.5% of Canada’s electricity. The majority of Canada’s electricity comes from hydropower and it has significant deployment potential for other renewable energy technologies. There are now just 15 coal plants left operating. 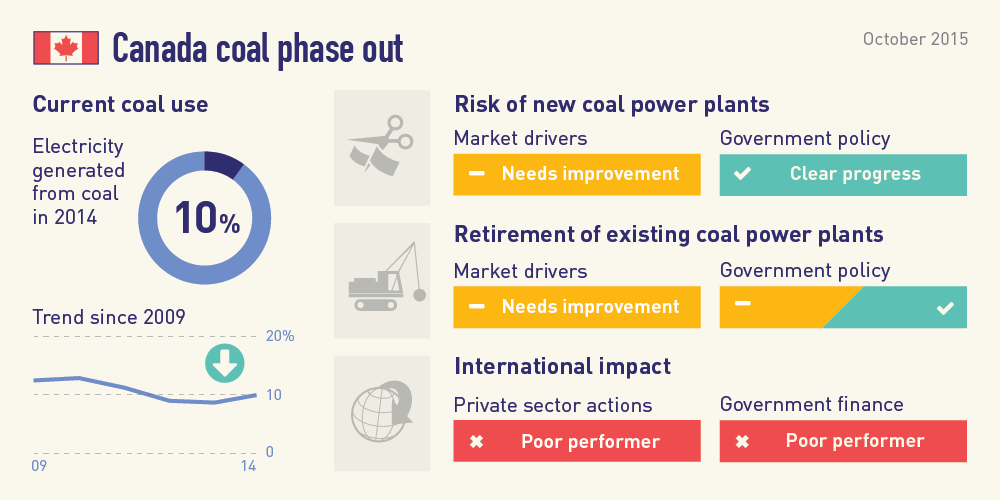 The regulation of CO2 emissions from coal power plants is one of the few areas where the Canadian Federal government has taken proactive action to address climate change. On 1 July 2015 Canada’s Emissions Performance Standard entered into effect. This rules out new unabated coal without CCS.  Together with increasing potential for the deployment of renewables and shifting market dynamics, there is now no prospect of new unabated coal in Canada.

At a federal level, the Emissions Performance Standard framework also introduces an end-of-life retirement plan for existing coal plants. It should be noted, however, that the final EPS regulations are looser than the original proposals and enable the majority of coal plants to continue emitting until they reach 50 years of operations. They also fail to restrict emissions from power plants in the period before they reach the designated retirement age. They therefore fail to bite sufficiently strongly or quickly enough to have a significant impact on CO2 emissions reduction. This approach could now be strengthened to secure an accelerated coal phase out timetable.

More positively, individual Provinces within Canada are showing greater urgency. Most notably, Ontario completed a phase out of unabated coal in 2014, having retired 9GW of coal power plants over the preceding 10 years, including North America’s largest coal plant. This approach secured significant improvements in air quality as well as reducing CO2 emissions. We have given special recognition to Ontario’s efforts in our assessment of Canada’s performance.

Alberta is now the largest coal user in Canada, with coal the source of 55% of electricity generation in the province. The new NDP government has stated that it intends to reduce emissions from coal and is currently considering how it might deliver this (and over what timeframe).

Canada has played a moderately constructive role within OECD negotiations on export credits but has not committed to action on bilateral or multilateral development finance. It is also seeking to expand its coal exports in the face of falling domestic demand; Canada is currently the world’s 7th largest coal exporter.

Canada has an opportunity to secure a place at the top table of climate influence if it commits to a clear timetable for the phase out of unabated coal ahead of the Paris negotiations. Canada faces similar transition challenges to Italy and the UK over similar timescales so could work together to catalyse a broader coal phase out coalition with additional countries and partners, including the Province of Alberta.

Internationally, Canada must work with other G7 countries to strengthen OECD conditions on export credits ahead of the Paris talks. This should end financing of unabated coal plants and shift support to accelerate the deployment of renewables. Canada must also strengthen restrictions on coal financing via bilateral development finance and the multilateral development banks.

The scorecard report also identifies clear actions G7 countries can take to demonstrate their commitment to move beyond coal in the run-up to COP 21:

> Japan needs to start with the most fundamental action first: it must act to turn off the tap of new coal power plants

> All G7 countries should immediately cooperate to strengthen OECD conditions on export credits ahead of the Paris talks, with further commitments by Japan, Germany, Italy and Canada, to strengthen restrictions on the use of international development finance for coal projects.

> Canada, the UK and Italy all have a clear opportunity to commit to a clear timetable for the phase out of unabated coal ahead of the Paris negotiations. Given their similarities, they could work together to effectively manage the transition and catalyse a broader coal phase out coalition.

> As host of the negotiations, France is under pressure to confirm how and when it will end the use of coal domestically and reduce its exposure to coal overseas through state-owned utilities.

> Germany has acknowledged the need for additional action on existing coal. It set the standard with the G7 commitment to decarbonise, but this will require additional policy efforts during 2016 to start putting it into action.

> Lastly, the USA is in a privileged position having implemented a wide-ranging set of policies related to coal during the course of 2015. While this is a positive expression of intent, the USA must continue efforts by enabling transition pathways for coal-producing regions, including by addressing the risk of increased coal exports and the impact of coal production from federal lands.

Through the lens of both policy and market dynamics, the scorecard ranking is based on three criteria for each country: the risk of new coal power plants, retirement of existing capacity and support for construction of coal projects overseas. The intention is for the scorecard assessment to be updated each year or on significant occasions, to help ensure transparency on each countries progress towards achieving coal phase outs.

Emissions growth can be slowed to a crawl – IEA